On Friday, the equities of most of the major base metal miners drifted to lower price levels. The base metals in LME fell on January 15, and the same negative sentiment was seen in the price movements of base metal miners. 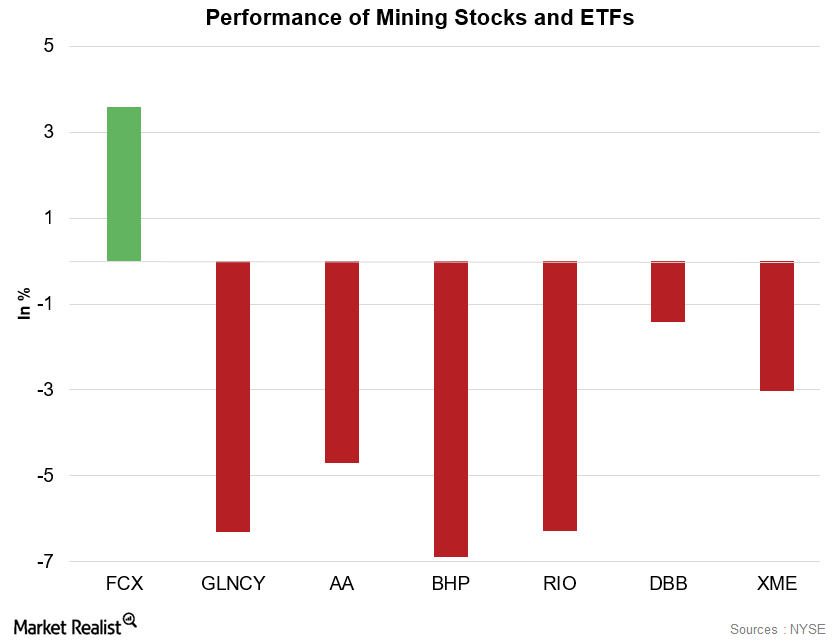 Freeport-McMoRan (FCX), one of the largest copper producers in the world, has been in a downtrend since the beginning of 2016 and has fallen 35.7% so far this year. However, Freeport gained 3.6% and closed the day at $4.35. This is the highest day close for Freeport since January 8. Last year, Freeport fell more than 70% and was one of the worst-performing mining stocks. Glencore (GLNCY), the metals trading and mining giant, resumed its downfall. On Friday, Glencore fell 6.3% and ended the day at $2.08. The price level of $2 is the closest support level for Glencore. Since the beginning of this year, Glencore has fallen 20.7%.

Alcoa was trading at March 2009 levels

Rio Tinto (RIO), the British-Australian mining corporation, fell 6.3% and ended the day at $23.62. This was the lowest day close for Rio Tinto since March 2009, which makes it an almost seven-year low. Since the beginning of 2016, Rio Tinto has fallen 19%.

The PowerShares DB Base Metals Fund (DBB) and the SPDR S&P Metals & Mining ETF (XME) fell 1.4% and 3%, respectively, on Friday.