Signet Jewelers (SIG) is the world’s largest retailer of diamond jewelry. As of January 8, 2016, Signet was trading at the highest forward PE (price-to-earnings) multiple compared to its peers in the jewelry industry (XRT), including Tiffany (TIF) and Fossil Group (FOSL). It’s also trading at a higher valuation relative to the S&P 500 (SPY) (IVV) (VOO). 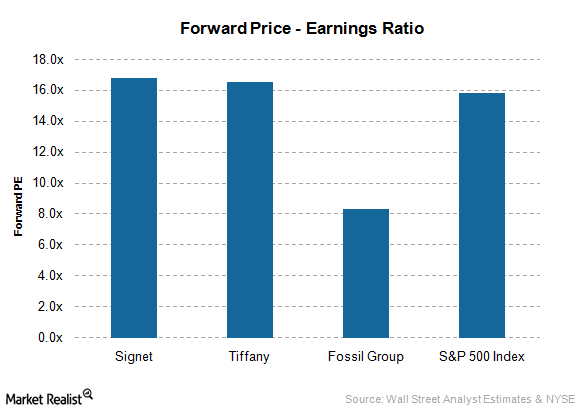 According to MasterCard SpendingPulse, retail sales in the United States, excluding auto and gas, increased about 8% year-over-year between Black Friday on November 27, 2015, and Christmas Day. It was driven by e-commerce sales that grew by double digits with 20% YoY (year-over-year) growth, mainly driven by Amazon (AMZN).

But high-end watches and jewelry didn’t see any benefit from the holiday season due to a strong US dollar, according to MasterCard SpendingPulse. Signet, which generates almost 87% of its revenue from the United States, witnessed growth in the holiday season.

According to MasterCard SpendingPulse, a rush by consumers at the end of the holiday season helped Signet and Tiffany.

Markets tend to value companies at a high multiple if growth expectations are high. That may be the reason behind Signet having a higher multiple than its peers.