According to a report from The Times of India, Apple (AAPL) has decided to cut the price of its iPhone 5s in India (EPI) from $665 to $370. This move is aimed at increasing market share in India where Apple is still a small player in the smartphone segment.

According to a report from IDC (International Data Corporation), Korean (EWY) smartphone manufacturer Samsung (SSNLF) continues to lead the smartphone segment in India with 24% market share. Samsung is followed by domestic players such as Micromax and Intex with market shares of 16.7% and 10.8%, respectively. Lenovo (LNVGY) has a market share of 9.5% in India, while Apple and Xiaomi currently have market shares of 2% and 4%, respectively. In fiscal 2015, Apple sold 1.7 million iPhones in India. 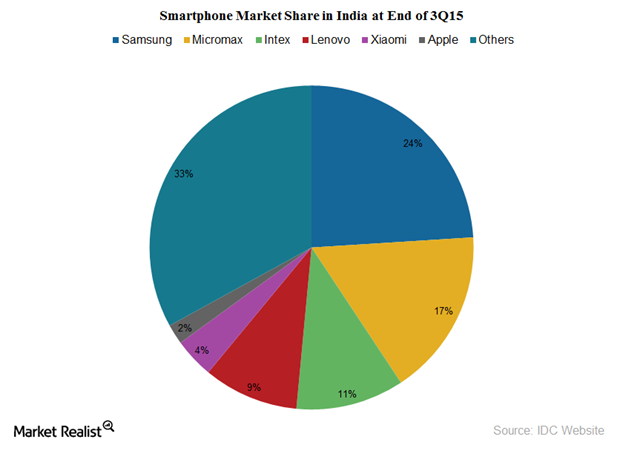 In the past, Apple hasn’t focused a lot on Indian markets. It believed Indian customers had a low purchasing power compared to China. But in 3Q15, Apple saw a 93% increase in iPhone sales in India, outpacing China for the first time. India is the third largest smartphone market after the United States and China. IDC expects India to be the second largest smartphone market by the end of 2017.

Lowering the price of the iPhone in India will impact Apple’s gross margins. But it will also help increase sales and revenues at a faster pace. Apple constitutes 16% of the Vanguard Information Technology ETF (VGT) and 14% of the iShares S&P Global Tech ETF (IXN).