Analysts covering Cliffs Natural Resources (CLF) are projecting sales of $1.9 billion and EBITDA (earnings before interest, tax, depreciation, and amortization) of $240 million for the next four quarters. This implies an EBITDA margin of 12.2%. The results for the trailing four quarters are sales of $2.8 billion and EBITDA of $465.3 million, implying a margin of 16.5%. Declining sales and EBITDA are likely due to lower volume guidance from Cliffs Natural Resources and the negative sentiment in the US domestic steel market. 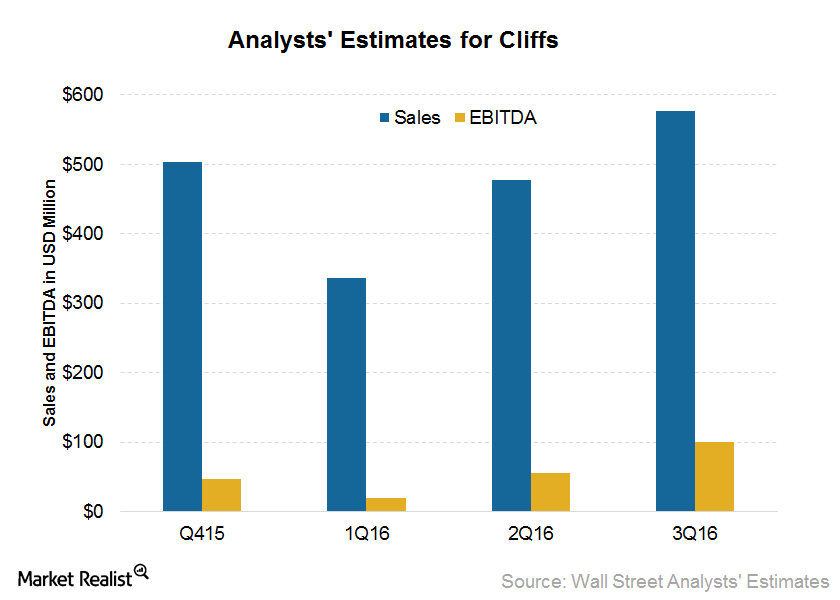 Room for a downside to estimates?

Many analysts have not updated their estimates recently, and there could be room for a downside to their estimates for Cliffs Natural Resources (CLF). In its 3Q15 results, CLF gave guidance for US realized revenue of $80–$85 per ton if the benchmark seaborne iron ore prices remained at $55 per ton or above.

At prices below that, the realized revenue would fall to $75–$80 per ton. Currently, seaborne iron ore is trading below $45 per ton, and market participants believe prices are expected to remain weak going forward to allow for supply and demand adjustments. Factoring in these adjustments should lead to a drop in analysts’ estimates for Cliffs Natural Resources.

Also, unlike its peers, which have operations in emerging markets, Cliffs Natural Resources (CLF) does not have the benefit of weaker currencies to support costs. While CLF’s management improved productivity and reduced costs considerably in 2015, any significant progress from here on out will be quite difficult. This could also lead to pressure on EBITDA going forward.

Investors should also consider that the downturn in the iron ore market is more structural rather than cyclical due to the changing demand from China (consumption-driven demand rather than investment-led demand) and supply expansions from major iron ore players. This could keep iron ore prices lower for longer, which would also be reflected in the earnings estimates for iron ore miners.

The current market sentiment is largely due to the worsening outlook for iron ore prices. This, in turn, is due to the supply glut by players such as BHP Billiton (BHP), Rio Tinto (RIO), Fortescue Metals Group (FSUGY), and Vale (VALE). These three stocks make up 31.6% of the iShares MSCI Global Metals & Mining Producers ETF (PICK). The SPDR S&P Metals and Mining ETF (XME) also invests in this space. Vale forms 1.8% of the iShares MSCI Brazil Capped ETF (EWZ).