The Orthopedics segment of Stryker (SYK) accounts for ~42% of the company’s total sales. The segment saw a sales growth of ~5.8% on a constant currency basis for 3Q15. For the same quarter, weak international sales were reported whereas Stryker’s US sales grew at 9% despite strong competition. Wall Street analysts projected a rise in revenues for Stryker’s Orthopedics segment, primarily driven by strong trauma and extremities sales and significant growth in the spine, foot, and ankle sales. 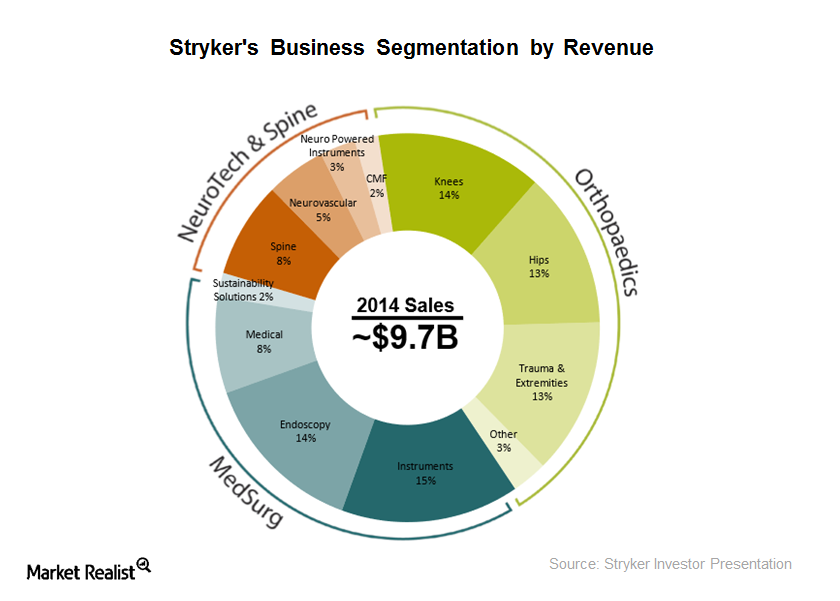 Also, a number of strategic acquisitions of smaller companies with complementary product portfolios in the MedSurg segment are expected to generate significant top line and bottom line growth.

On March 01, 2013, Stryker completed the acquisition of Trauson, a Chinese orthopedic device giant, establishing its presence in China and entering the mid-tier market segment with potential growth opportunities. However, the macro market issues in China and Latin America have impacted sales from emerging markets in the recent quarters. Additionally, this is expected to continue in the short term. The acquisition led to expanded market reach and could result in long-term growth potential.

Stryker completed the acquisition of MAKO Surgical, a pioneer in robot-assisted surgery in orthopedics, on December 17, 2013. Since the acquisition, sales of MAKO robots rose and more than doubled in 2015. The company also received FDA clearance for the use of MAKO robot in total knee implant surgeries.

The approval will result in the expansion of the company’s product portfolio consisting of partial knee and total hip applications that are currently offered in the robotic reconstructive service line. However, the significant market share gains and revenue implications of the total knee implants could be demonstrated in 2017, as the company plans for the market release in the second half of 2016 and full commercialization in 2017.

However, with the acquisition of Blue Belt Holdings by Smith & Nephew, the latter has emerged as a competitive threat in the robot-assisted surgery segment of the orthopedic market. It presently offers robotic assistance in unicondylar and partial knee replacement surgeries at significantly lower costs than the MAKO product offerings of Stryker.