After Berkshire Hathaway (BRK-B) and 3G Capital acquired Heinz in 2013, they restructured Heinz’s portfolio and invested in the segments, products, and ideas that it imagined would best help Heinz win in the European market. Now the newly formed Kraft Heinz Company (KHC) also plans to invest more in Europe. 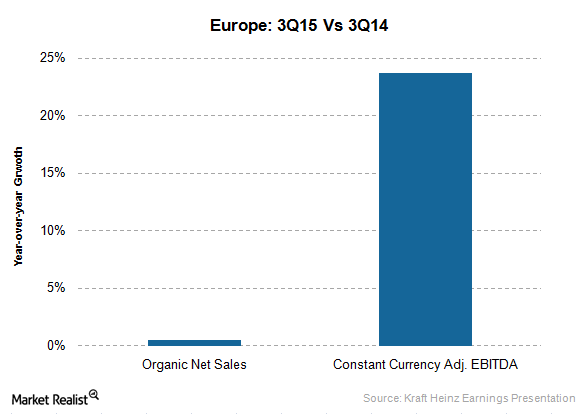 So far, in 3Q15, which ended on September 27 for the company, the Kraft Heinz reported a 0.5% YoY (year-over-year) increase in organic net sales in Europe. Constant currency adjusted pro forma EBITDA (earnings before interest, taxes, depreciation, and amortization) grew by 23.7%.

To generate more sales through more investments is extremely challenging in the packaged foods industry. But the company has been investing more in Europe region on a ground of big bets innovation strategy. And with its robust product pipeline—not only in Europe but the US, Canada, and other geographies—the company expects to achieve positive results from higher investments.

To support the expansion of the product line in Europe, Kraft Heinz expects to make more investments in marketing and selling in Europe. For this reason, the company increased its advertising by double digits in 3Q15.

General Mills (GIS), one of Kraft Heinz’s major peers in the packaged foods industry (XLP), has also witnessed revenue growth in Europe, from 6.1% revenue contribution in 2011 to 12.1% contribution to total revenues in fiscal 2015, which ended on May 31 for the company.

Kraft Heinz makes up 0.23% of the portfolio holdings of the iShares Core S&P 500 (IVV). Consumer staples companies make up 9.8% of IVV’s portfolio.

Now let’s take a related look at another key strategy of Kraft Heinz.