The EIA (U.S. Energy Information Administration) released its STEO (Short-Term Energy Outlook) report on December 8, 2015. In the report, EIA highlighted that global crude oil production was 93.3 MMbpd (million barrels per day) in 2014. The global crude oil output could increase to 95.5 MMbpd and 95.8 MMbpd in 2015 and 2016, respectively. 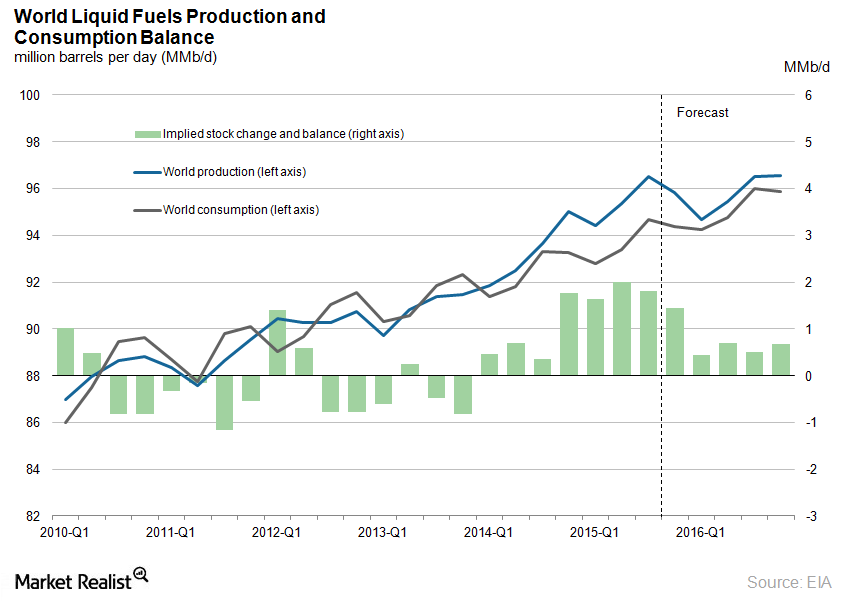 The EIA added that global crude oil consumption could average at 93.8 MMbpd in 2015 and 95.2 MMbpd in 2016. The supply and demand gap is estimated to decline from 1.7 MMbpd in 2015 to 0.6 MMbpd in 2016. However, the forecast doesn’t consider the consensus of rising production from Saudi Arabia, Iran, Iraq, and Indonesia.

The EIA is scheduled to release its next STEO (Short-Term Energy Outlook) report on January 12, 2015. The next edition might widen estimates for the crude oil supply and demand gap. The global oil market has an inventory of 3 billion barrels. The refined products inventory is also at record highs. Record inventories will add more pressure to the oil market.

In the next part of this series, we’ll explore where crude oil prices are heading in 2016.