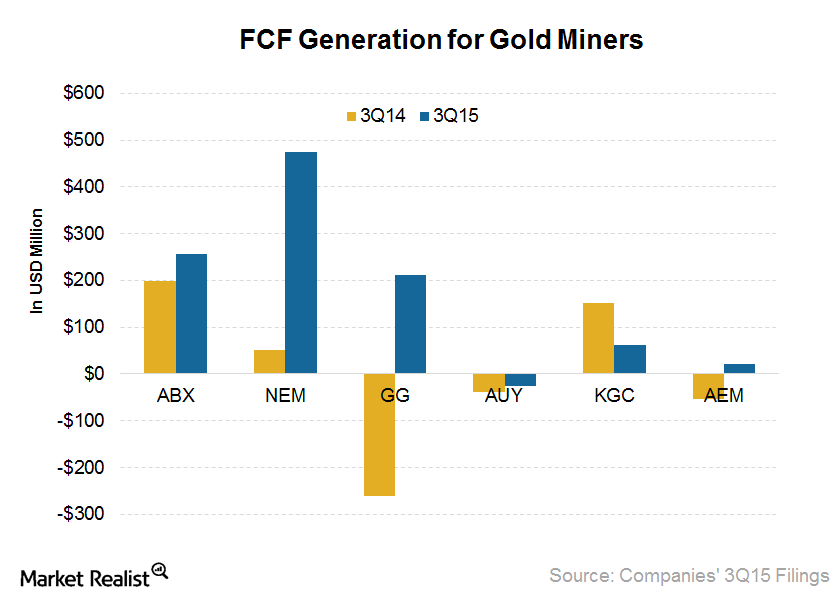 Agnico Eagle Mines (AEM) generated free cash flow of $21 million in 3Q15. It has been posting positive FCFs for the past four quarters. It also reduced its capex guidance for 2015 by $50 million. With its focus on cost-cutting and productivity initiatives, the company is expected to generate FCF going forward.

Newmont Mining’s (NEM) FCF and cash from divestitures are ahead of its project spending to date. While the company expects to be FCF-positive at current metal prices in 2016, it will be weighted more towards the back end due to the timing of capital spending. Cost reductions have allowed Newmont to report positive FCF for the sixth consecutive quarter in 3Q15. The company’s FCF was $478 million in 3Q15 compared to $51 million in 3Q14.

Building on the positive free cash flow (or FCF) it generated in 2Q15, Barrick Gold (ABX) further increased its FCF to $256 million in 3Q15. Management mentioned that its objective is to increase FCF from a portfolio of high-quality gold assets. To achieve this objective, the company has gone for a leaner look with a decentralized operating model. Management has also stated that all of its mines are free cash–positive, given a gold price of $1,100 per ounce.

Kinross Gold (KGC) is also generating free cash flow. Along with the available liquidity, this should be enough to fund its operations, near-term capital expenditure, exploration activities (with a guidance of $650 million for 2015), and near-term debt repayments. But its ability to generate FCF might come under pressure going forward due to limited growth options.

With lower capex and higher operating cash flow, Goldcorp (GG) has turned its after-capex FCF to $213 million in 3Q15 from -$260 million in 3Q14. The 60% reduction in dividends in 2Q15 should save the company $300 million annually. A positive FCF trend could continue, given the scheduled ramp-ups of Goldcorp’s mines.

Yamana Gold (AUY) generated a negative FCF of 25 million for 3Q15, mainly due to $50 million change in working capital. The company has taken several initiatives—including streaming transactions and forming strategic partnerships—to improve its ability to generate FCF. Cash flow generation is expected to accelerate going forward as production starts from high-grade areas and costs get support from currency tailwinds.

You can access the gold sector by investing in the VanEck Vectors Gold Miners ETF (GDX). GDX invests in intermediate and senior gold producers. Goldcorp accounts for 7% of its holdings.