Over the past few quarters, Ares Capital (ARCC) has consistently increased its exposure to second lien senior secured debt. Second lien debt made up 21% of its new commitments in 3Q15. It also represents 30% of the company’s total portfolio, while the first lien senior secured loans represent 31%, compared with 27% and 32%, respectively, in the previous quarter.

In October 2015, Ares Capital made new investment commitments and funding of approximately $305 million. Of these new commitments, 49% were in second lien senior secured loans. 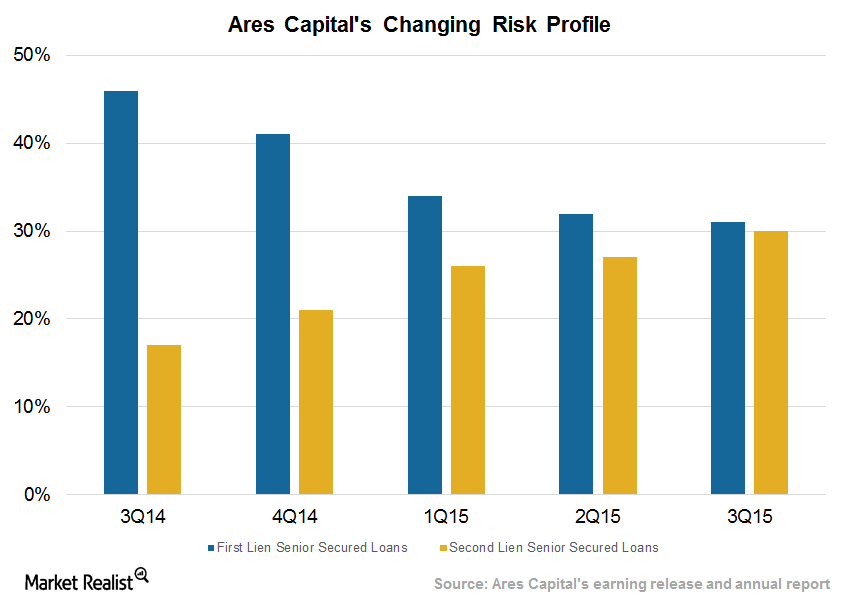 The exposure to first lien loans has decreased over the past few quarters, from 46% in 3Q14 to 31% in 3Q15. The company is targeting a minimum yield that is 400 basis points higher on its second lien debt offerings than what it generates on first lien senior loans.

This strategic change should help Ares Capital boost its average yield on its overall portfolio. The overall risk profile has deteriorated marginally, but it remains strong. Ares Capital management believes that the careful selection of companies can help it eliminate the risk arising from the selection of a second lien over a first lien.

GE Capital’s exit from the SSLP (senior secured loan program) should bring challenges as well as opportunities for Ares Capital. The major challenge is to find new partners with similar or better capital resources and an understanding of the business.

Still, Ares Capital (ARCC) benefits from a funded portfolio, while other players in the market would have to initiate operations from scratch. GE Capital’s exit leaves a certain void to fill. However, to a large extent, it can benefit Ares Capital if the company is successful in tapping new partners with sizable resources.

Ares Capital has generated returns of 11.2% on its book equity. This is higher than the peer average of 10.7%. Below is a look at how some of the firm’s peers in investment management have fared in terms of return on equity: