In its weekly report on November 4, 2015, the EIA (U.S. Energy Information Administration) reported that US crude oil refinery inputs averaged more than 15.6 MMbpd (million barrels per day) during the week ended October 30, 2015. This was a rise of 21,000 bpd (barrels per day) compared to the prior week’s average. 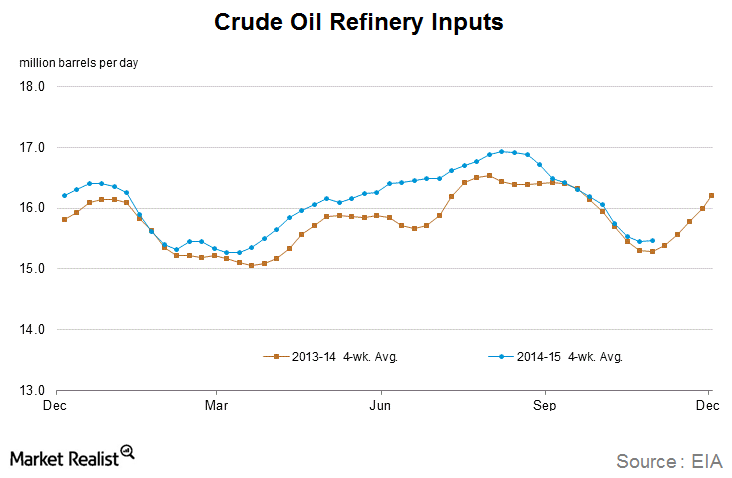 The uptick in refinery inputs is an indication that seasonal maintenance is approaching its end. Usually, higher crude oil inputs indicate that refiners such as Marathon Petroleum (MPC) and Tesoro (TSO), as well as refining MLPs such as Calumet Specialty Products Partners (CLMT) and CVR Refining (CVRR), are raising throughputs due to the current crude oil (USO) and refined product price environment. Marathon Petroleum and Tesoro make up 3% of the Vanguard Energy ETF (VDE).

Refineries are the main source of crude oil demand. Refinery input levels affect crude oil inventory draws and builds. Refining throughputs affect inventory levels not only for crude oil but also for refined products such as gasoline and distillates. We’ll take a look at inventory levels for these products later in this series.