Kinross Gold’s (KGC) mines in Russia are among the lowest cost and the highest grade in its entire portfolio. The Kupol deposit is located in the Chukotka Autonomous Okrug of the Far East region of the Russian Federation. The Dvoinoye mine is located 100 kilometers from the Kupol mine. Dvoinoye is Kinross’s newest and lowest-cost gold and silver (SLV) mine. Commercial production at Dvoinoye began on October 1, 2013. 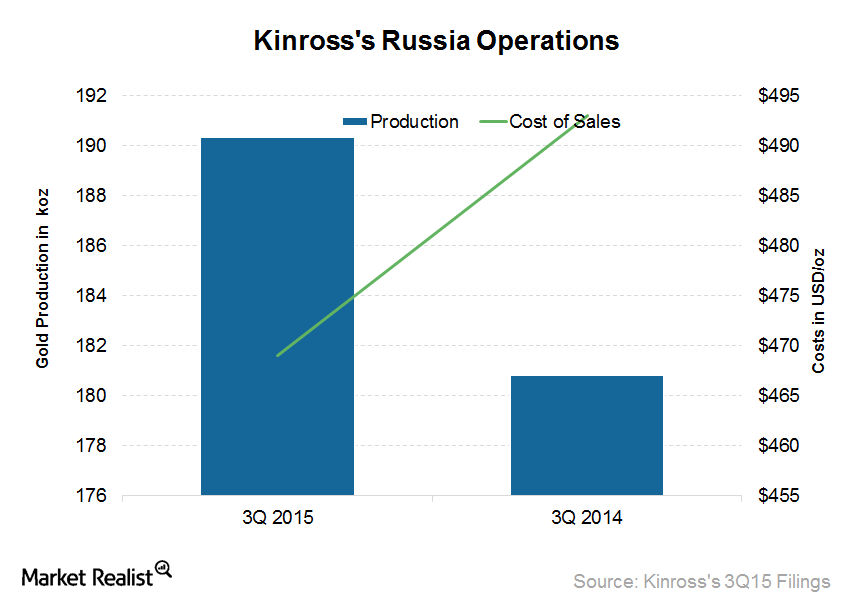 Kinross Gold’s Russia operations showed continued strong performance in 3Q15. Its gold production increased by 5% year-over-year (or YoY) to 190,000 ounces. This resulted partly from higher ore grades, which were 3% higher in 3Q15. This is according to the plan of mining higher grade material from the Dvoinoye mine.

The production cost of sales declined by 5% YoY in 3Q15. The production cost of $469 per ounce was the lowest since Dvoinoye operations commenced in 2013. This improvement in costs is due to higher grades from Dvoinoye, decreased labor costs, favorable exchange rates, and lower reagent and diesel costs. Any further decline in the Russian ruble could lead to still lower costs going forward from this division.

However, this strong growth trend in production and reduction in costs is not an experience unique to Kinross in 3Q15. Kinross’s peers, such as Barrick Gold Corporation (ABX), Goldcorp (GG), Newmont Mining (NEM), and Agnico-Eagle Mines (AEM), also reported strong production and lower costs in their latest quarterly reports. Newmont Mining (NEM) makes up 6.1% of the holdings of the VanEck Vectors Gold Miners ETF (GDX).