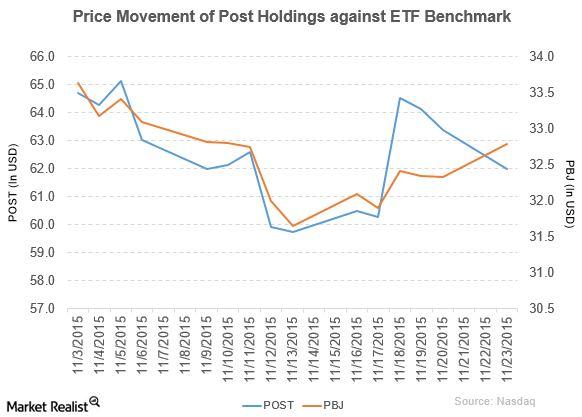 The PowerShares Dynamic Food & Beverage ETF (PBJ) invests 2.6% of its holdings in Post Holdings. The ETF tracks a multifactor, tiered, equal-weighted index of US food industry stocks. The YTD price movement of PBJ is 6.8% as of November 20, 2015.

Performance of Post Holdings in fiscal 4Q15 and fiscal 2015

The company announced that it would close its Dymatize manufacturing facility in Farmers Branch, Texas, and permanently transfer production to its party facilities under co-manufacturing agreements.

It has completed the acquisition of Willamette Egg Farms, a producer, processor, and wholesale distributor of eggs and egg products.

The company projected the following figures for fiscal 2016: