Nordstrom (JWN) reported its 3Q15 results after the close of financial markets on November 12. The upscale department store disappointed investors with 3Q15 adjusted EPS (earnings per share) of $0.57, missing the consensus Wall Street earnings estimate of $0.72. The company’s third quarter of fiscal 2015 ended on October 31, 2015. 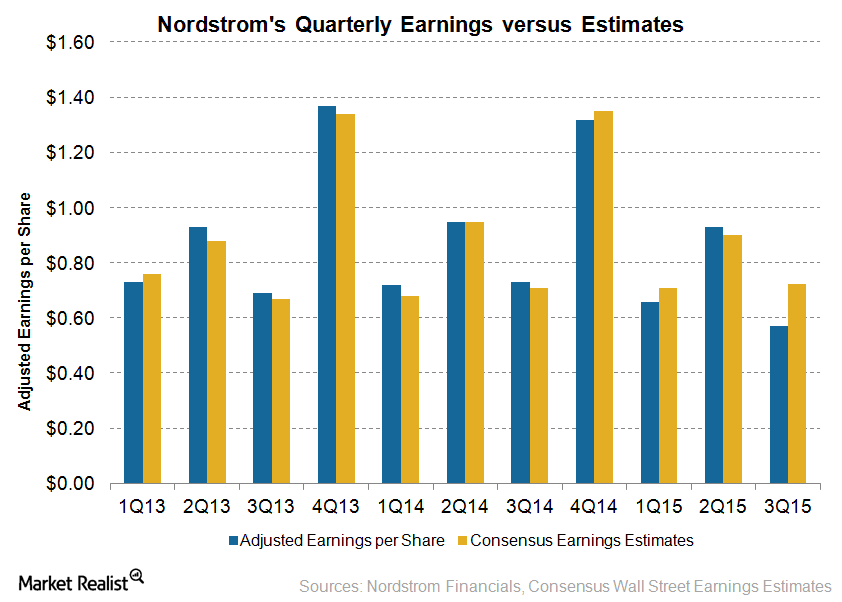 The fall in Nordstrom’s earnings in 3Q15 was a result of its growth investments. The impact of the Trunk Club acquisition and the ongoing growth plans in Canada led to an incremental reduction to EBIT (earnings before interest and taxes) of $20 million in 3Q15 compared to 3Q14.

Nordstrom’s stock fell by 15% to $53.96 on November 13, the day following the company’s 3Q15 results announcement. Markets reacted sharply to the news of a slowdown in the company’s sales and lowered guidance. Nordstrom’s 3Q15 results followed disappointing results by Macy’s (M) on November 11. Macy’s reported an 8.2% fall in its 3Q15 adjusted EPS due to lower sales.