NextEra Energy (NEE) had total debt of $29.7 billion on its books as of September 30, 2015. Most of its debt, or $25.6 billion, is in the form of long-term debt obligations. The remaining portion is in the form of short-term debt and the current portion of long-term debt. NEE had a debt-to-equity (or DE) ratio of 1.33x and a debt-to-market (or DM) capitalization ratio of 0.66x. 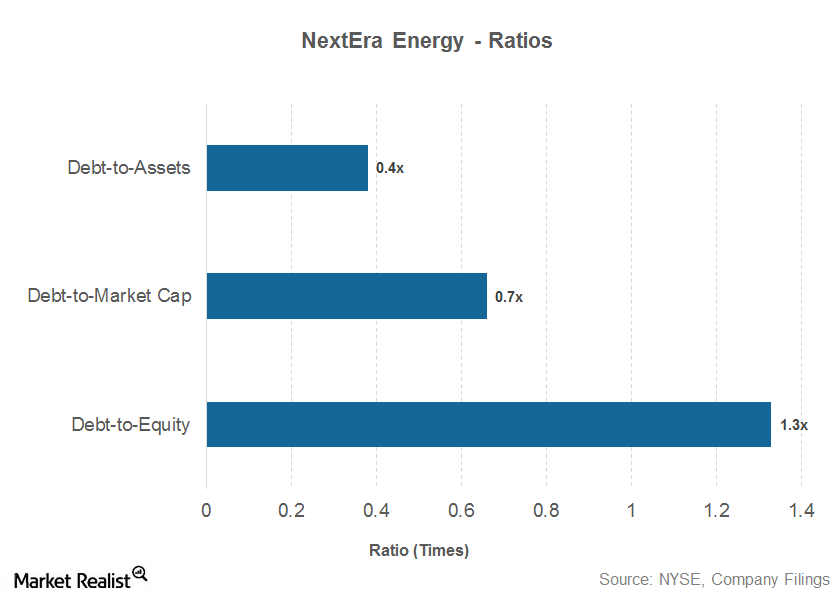 Power companies own large asset bases. So another key debt metric in the industry is the debt-to-asset ratio, which reflects leverage. NextEra has a debt-to-asset ratio of 0.38x, higher than Exelon’s (EXC) 0.28x but lower than Dominion Resources’ 0.48x. Its total debt-to-EBITDA (earnings before interest, taxes, depreciation, and amortization) ratio of 3.6x was lower than other players’ ratios except Exelon’s (EXC) 3.4x. This means NEE generates higher EBITDA per unit of debt despite being more leveraged than some of its peers, which implies efficient debt utilization.

NextEra Energy is part of the Vanguard Dividend Appreciation ETF (VIG). It accounts for 1.2% of the fund’s total holdings.

Moody’s has rated NextEra Energy “Baa1/Stable” while Fitch and Standard and Poor’s have rated the company “A-/Stable.” All the rating agencies expect NEE’s credit metrics to either remain stable or improve over the medium term. For more information on what these ratings mean, please read our overview of credit ratings.

With investment-grade credit ratings from rating agencies, NEE is well positioned to raise funds from capital markets if needed.