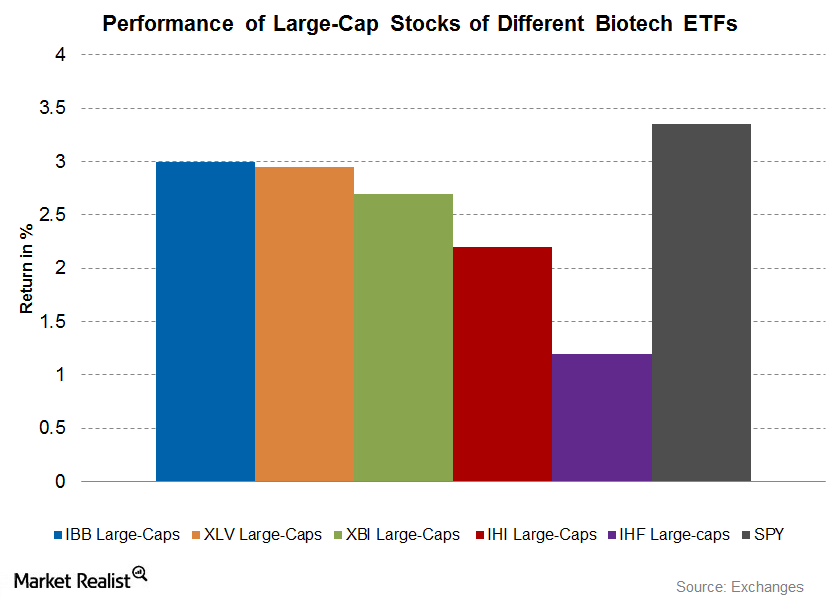 The above graph reflects the returns of large-cap stocks of various biotech ETFs compared to the SPDR S&P 500 ETF (SPY) for the week ended November 20. SPY outperformed other biotech ETFs with a return of 3.4% for the same period.

Mylan (MYL) stock rose 6.4% for the week ended November 20, 2015. It went up on a couple of new drug launches and a share repurchase plan. According to the press release, MYL has announced “the U.S. launch of Almotriptan Tablets USP, 6.25 mg and 12.5 mg, the generic version of Janssen Pharmaceutical’s AXERT®. Mylan received final approval from the U.S. Food and Drug Administration ([or] FDA) for its Abbreviated New Drug Application ([or] ANDA) for this product, which is used for the acute treatment of migraine attacks in adult patients with a history of migraine with or without aura.”

On November 16, 2015, Mylan announced that its board of directors has authorized the repurchase of ordinary shares in an amount up to $1 billion. The stock closed at $51.87 and was trading above the 50-day and 100-day moving averages. MYL has a weight of about 4.0% in IBB.