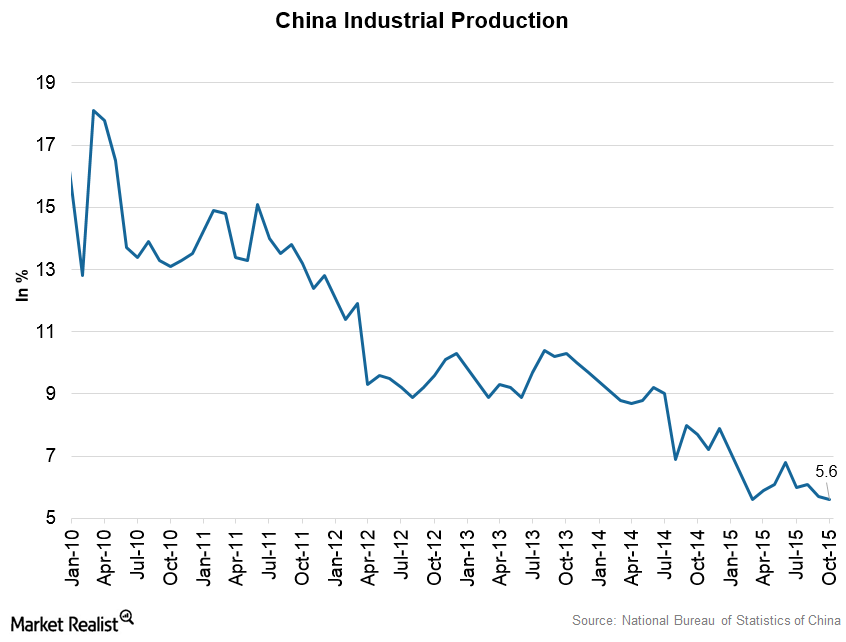 China’s industrial production data provided information on the growth of output produced by mines, manufacturers, and utilities in China. The country’s YoY (year-over-year) factory output growth came in at 5.6% for October 2015, below the forecast value of 5.8% and below September’s growth of 5.7%.

The data showed that China’s industrial output fell to a seven-month low, which is evidence of the weakness of the Chinese economy.

China’s retail sales data provided information on the change in retail sales in the country. These data are a significant indicator of consumer spending, which is the major economic activity in China.

October 2015’s YoY retail sales data, released on November 11 by the National Bureau of Statistics, came in better than expected. The retail sales data came in at 11%, which was a rise from the previous month’s value of 10.9%.

Impact of China economic data on base metals

Considering the fact that 45% of total copper demand comes from China, the economic news from China will definitely have an impact on copper and other base metals prices.

Even though weak Chinese industrial production data are negative for base metals prices, the retail sales data acted as a cushion and gave base metals room to breathe. After falling over the course of several trading sessions, base metals recovered on November 11, 2015, and closed in the positive.

Major base metals mining companies such as Rio Tinto (RIO), Freeport-McMoRan (FCX), and Glencore (GLEN) ended the day in the negative, continuing the weak economic sentiment.

China’s weak economic health has been the talk of the market, as it has had a large impact on commodity prices. Along with major mining companies, base metals ETFs such as the SPDR S&P Metals & Mining ETF (XME) and the Power-Shares DB Base Metals ETF (DBB) are also performing weakly this year due to the Chinese economy slowdown.