The historical interest rate environment in the US

A potential hike in the federal funds rate—the short-term interest rate whose levels are determined by the US Federal Reserve—has been in the news throughout 2015, because a rise in the rate, which is referred to as a “liftoff,” has been anticipated all year. But ten months and seven FOMC (Federal Open Market Committee) meetings later, no such liftoff has materialized.

But in order to understand the implications of the Fed’s pending decision in December 2015, let’s first take a look at the range of hikes the federal funds rate has witnessed since 1971. The graph below shows the year-end level of the rate from 1971 until 2014. Whenever the federal funds rate was in a range, we’ve taken the upper end of the range. 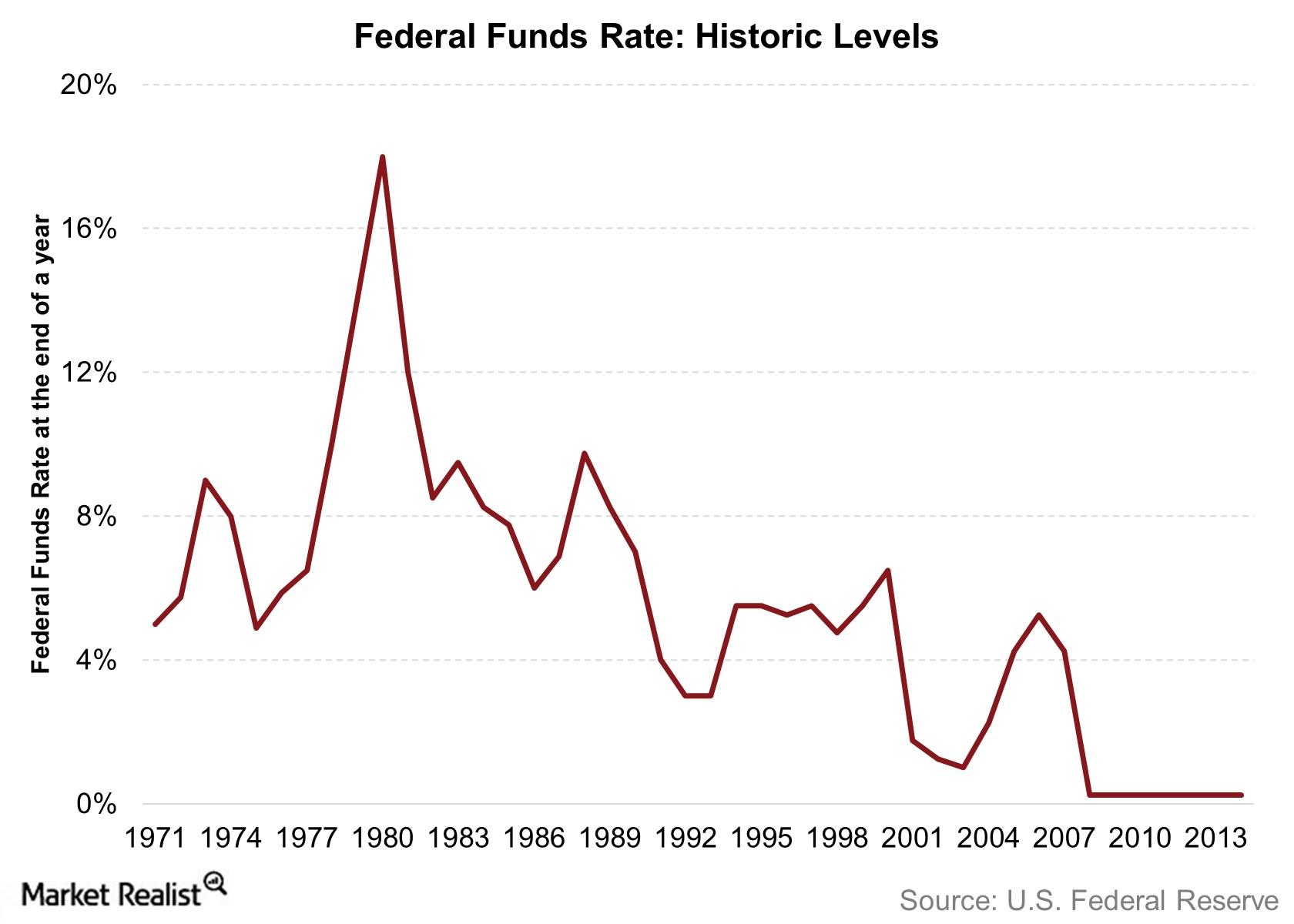 Bond indices since the yuan devaluation

If we look at these indices’ performances in comparison to stock market indices’ performances since the 1,000-point decline in the DJIA (Dow Jones Industrial Average) on August 24, 2015, which came in the wake of worries related to Chinese-influenced markets, we should note that the DJIA rose by 11.2% until October 23 while the S&P 500 rose by 9.6%.

Meanwhile, both bond indices mentioned above rose by only 0.25% each between August 24 and October 23. Still, bonds have outperformed stocks so far this year, and the S&P-BGCantor US Treasury Bond Index was up by 1.7% in 2015, as of October 23. During the same period, the S&P US Aggregate Bond Index returned 1.4%. The S&P 500 rose by 0.8% during the same period while the DJIA was actually down by 1.0%.

Now let’s return to the above graph. By the end of 1980, the federal funds rate had spiked to 18%. But keep in mind that, since the graph only shows year-end levels, it does not show the highest level that the rate had reached—a staggering 20% in May 1981.

The graph above also shows the unprecedented stance of the current monetary policy. Since 2008, there have been no changes in the rate—not even intra-year changes—and this is something that did not happen for the entire period shown in our graph.

Although the Federal Reserve has kept the possibility of a rate hike in 2015 open in its final meeting for the year in December, given recent economic indications like benign inflation, we still may see the flat line continue through the end of 2015 as well.

This brings us to the next important point on our agenda: the reasons behind such exceptionally high federal funds rates in the 1980s.

The federal funds rate and inflation in the Paul Volcker era

Previously in this series, we took a cursory look at the elevated levels of the federal funds rate in the 1980s. Now let’s take a closer look. 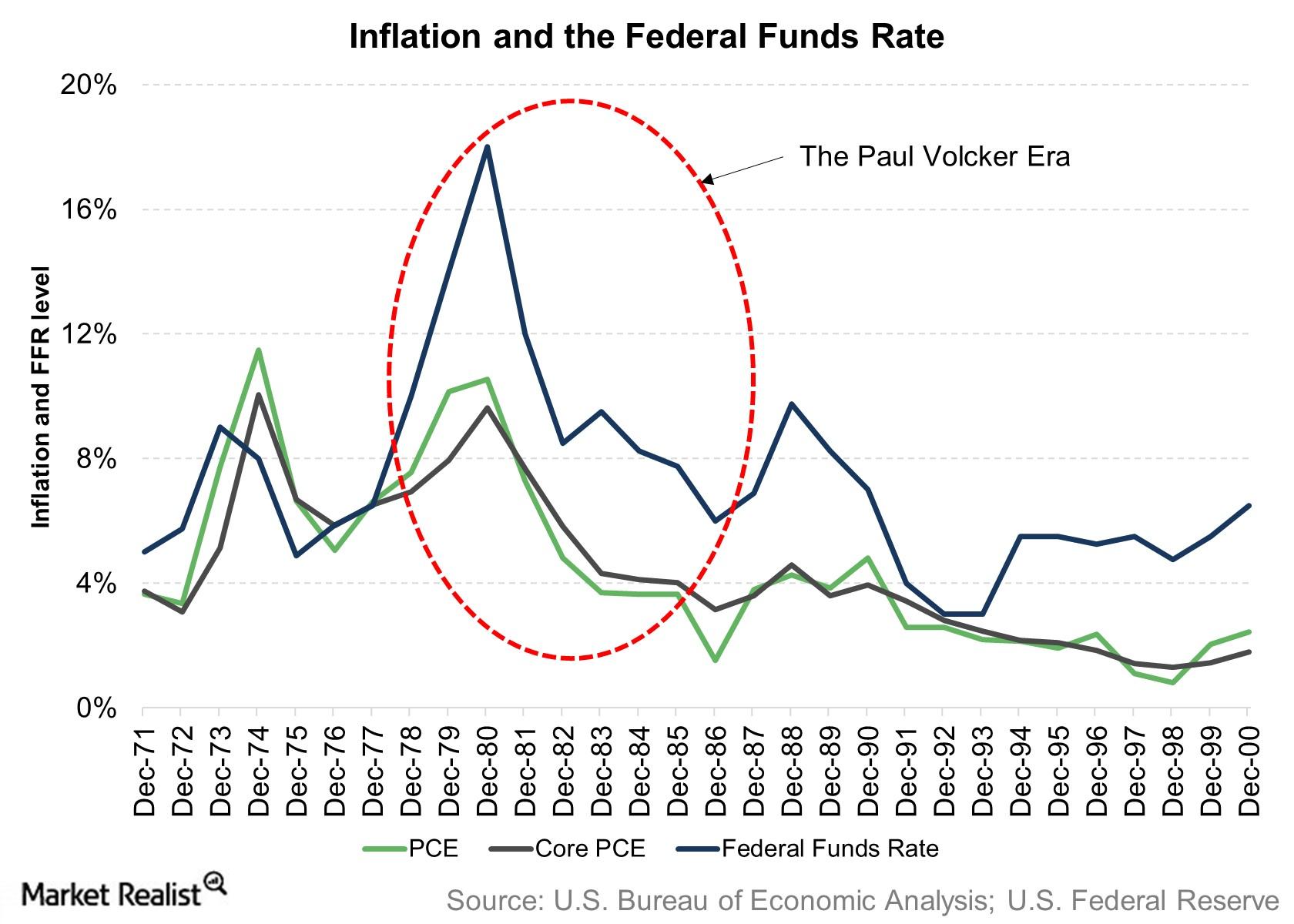 As we did with the federal funds rate previously in this series, here we’ve taken the December-end changes in PCE (personal consumption expenditures) and core PCE (which excludes food and energy prices) between December 1971 and December 2000. The change in inflation levels for a given month is compared to the same month a year ago.

Paul Volcker served as the Chairman of the Federal Reserve from August 1979 until August 1987, and his tenure stands out as the one during which we saw the most exceedingly high federal funds rates. Prior to Volker, the federal funds rate used to be changed by one-eighth to one-fourth of a percentage point, or 12.5–25 basis points, generally. But Volcker, on November 26, 1980, hiked the rate by a phenomenal 200–300 basis points, from 15% to 17–18%. This move was accompanied by highs in the commodity and bond markets.

Financial market participants watch monetary policy actions closely due to the impact of these actions on markets. Needless to say, these unheard-of actions would have had a strong impact on all major asset classes, including equities, bonds, commodities, and currency.

Previously in this series, we discussed the effects the Fed’s rate decisions have on equities. But to maintain consistency, we’ll need to continue our historical analysis of rate hikes throughout the 1990s. Then we’ll examine how asset classes (equities, bonds, commodities, and currency) performed in such a rising interest rate environment before diving into a discussion of some other asset classes necessary for proper portfolio diversification.

At this point in our analysis, we’ll concentrate on the reaction of Treasuries to rate hikes in the 1990s and onward. 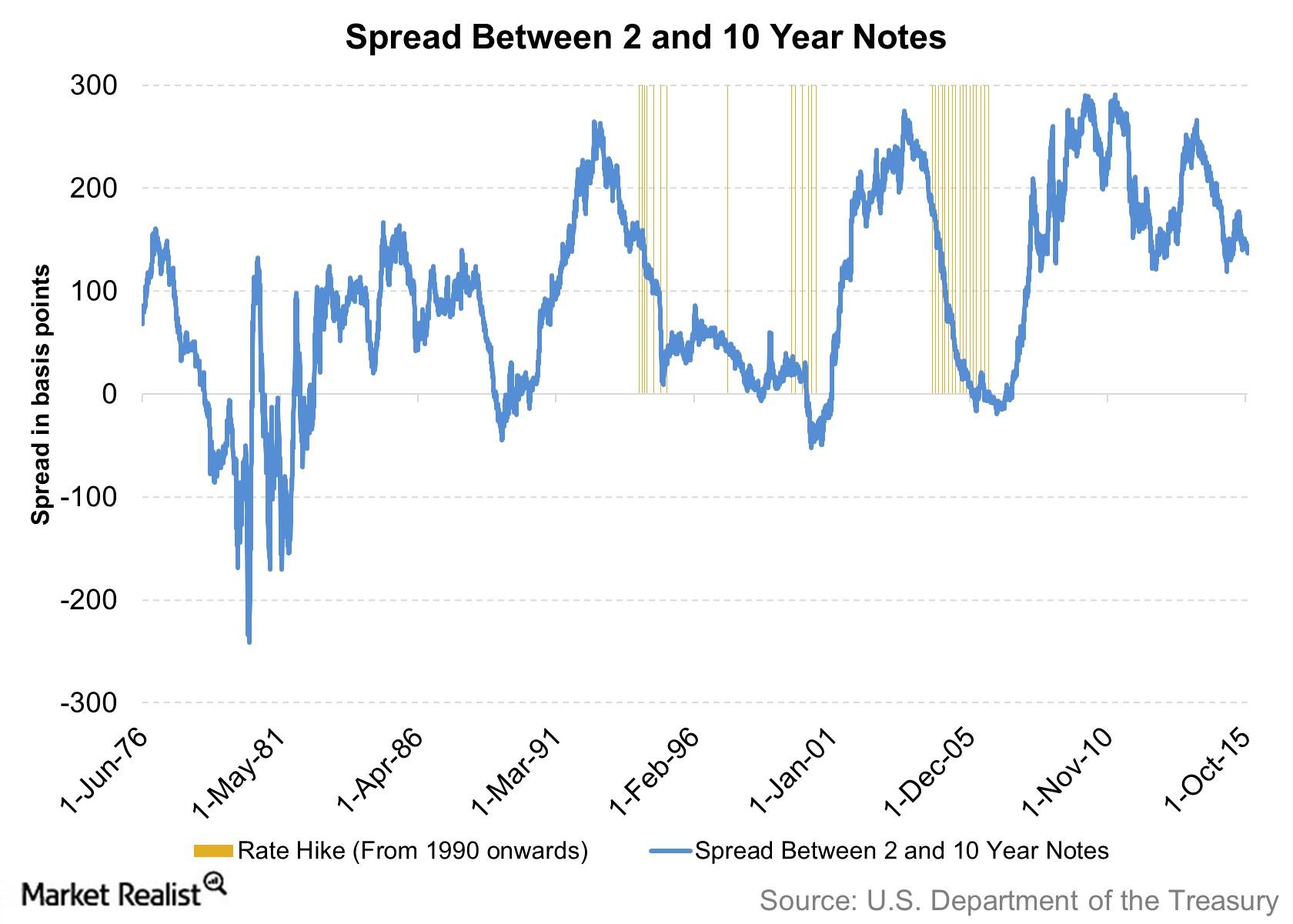 Yield spreads refer to the difference between the yields of two fixed income securities. They can either be of the same or different credit quality. In this part of our series, we’ll look at yield spreads between Treasury securities. Spreads are measured in basis points. One basis point equals 0.01 of a percentage point, so 1.0% equals 100 basis points.

These negative spreads in May 2000 indicated an inverted yield curve. And inflation, which had averaged 2.0% on a year-over-year basis between June 1999 and May 2000, was still rising.

The third interest rate hike cycle began on June 30, 2004, and ended with the final hike on June 29, 2006. Broadly speaking, spreads fell during this period. They began the period with a spread of 192 basis points between the two- and ten-year Treasury note and ended the period in negative territory, at -1 basis point. In fact, they first entered negative territory in December 2005, then saw a low of -16 basis points in February 2006, and then completely exited the territory in March 2006, only to re-enter it in June 2006.

A surge in yields on the two-year note was the reason behind a fall in spreads in all three of the above instances of rate tightening. While the rate hike attempted to keep inflation in check, thus keeping yields on longer-term securities down, a hike in the federal funds rate actually pushed spreads into negative territory in two of these three instances.

A similar reaction can be expected this time, in 2015, given that inflation expectations are low and that the Treasury yield curve is flat compared to these prior three instances.

Now let’s examine how commodities are impacted in a rising interest rate environment.

In order to analyze the impact of rising interest rates on commodities, we’ll look at the impact of a rate hike on the Thomson Reuters-CoreCommodity CRB Index. We have indexed the values of the index to 100 on January 3, 1994—one month before the first rate hike of the first interest rate cycle, which we discussed previously in this series, took place. 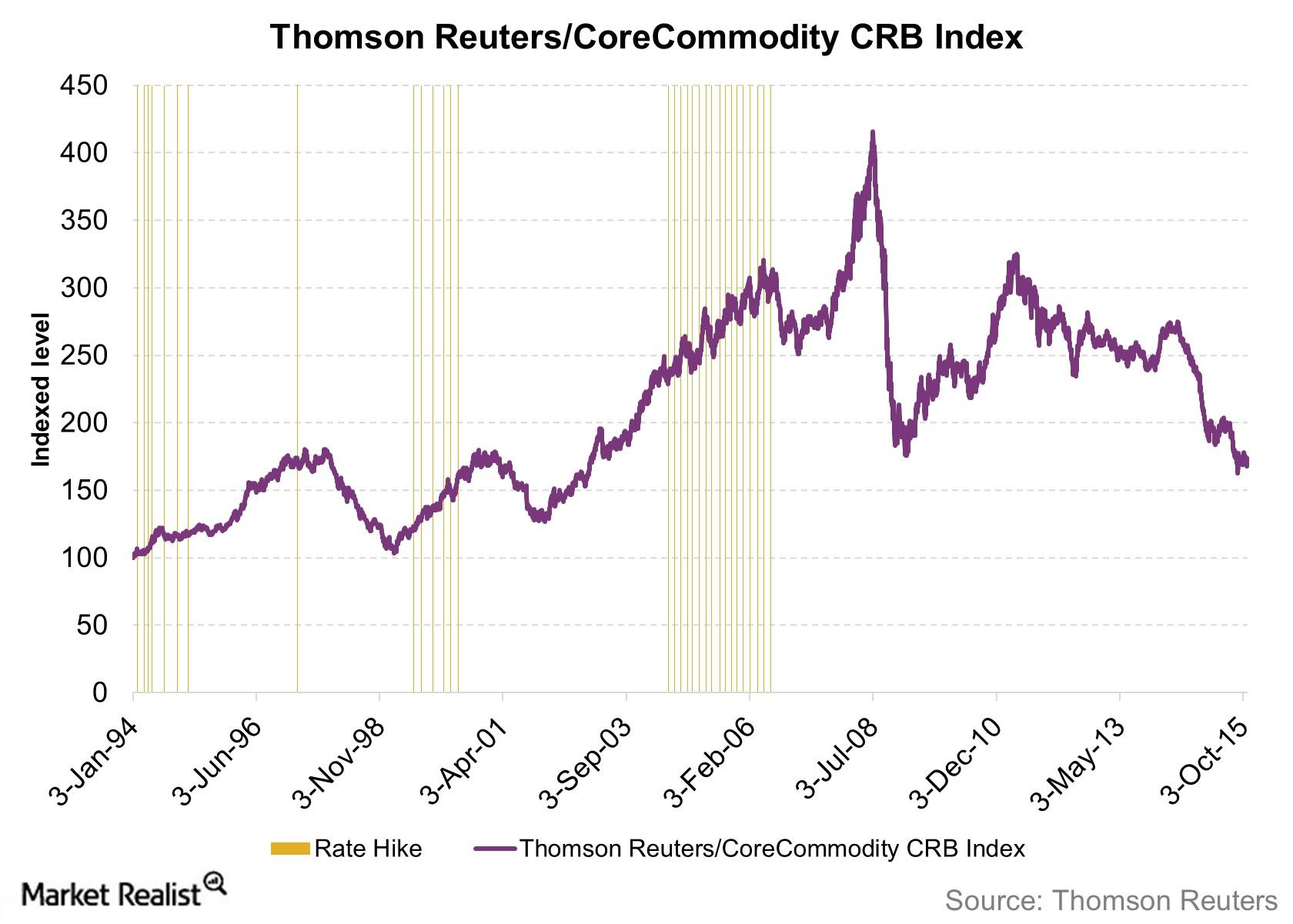 During the first cycle of interest rate hikes, when the federal funds rate was hiked seven times between February 4, 1994, and February 1, 1995, the Thomson Reuters-CoreCommodity CRB Index returned 10.5%.

During the second rate hike cycle, when the federal funds rate was hiked six times between June 30, 1999, and May 16, 2000, the Thomson Reuters/CoreCommodity CRB Index surged by 29.8%.

The third and final rate hike cycle lasted two years, beginning with a rate hike on June 30, 2004, and ending with a rate hike on June 29, 2006. During this period, the Thomson Reuters-CoreCommodity CRB Index rose by 30.3% on a point-to-point basis, or 14.2% on an annualized basis. Since commodities have their own factors that impact movement, this two-year period in the mid-2000s saw instances of a decline as well. But the broad trend during this period showed an overall rise.

It’s interesting to note that after the first rate hike cycle, the index continued to rise even after the cycle ended, whereas during the other two cycles, the index began to fall a few months after the end of the cycle. We saw similar behavior after the solitary rate hike in March 1997.

Historically, commodities have fared well in a rising interest rate environment. In the second cycle at the end of the 1990s, they started to move up even before the federal funds rate was hiked.

Currently, as of early November 2015, the index is lower compared to what it was in February 2009. If crude oil prices rebound and the Fed looks set to hike interest rates, investors may witness a rise in commodity prices.

Now let’s continue to the last asset class in our review—the US dollar—for more analysis of the potential impacts of a federal funds rate hike in late 2015.

Historical impact on the dollar

Let’s first consider the movement in the US dollar index in order to analyze the impact that a raised interest rate would have on the greenback. Below we have indexed the values of the index to 100 on December 31, 1970. 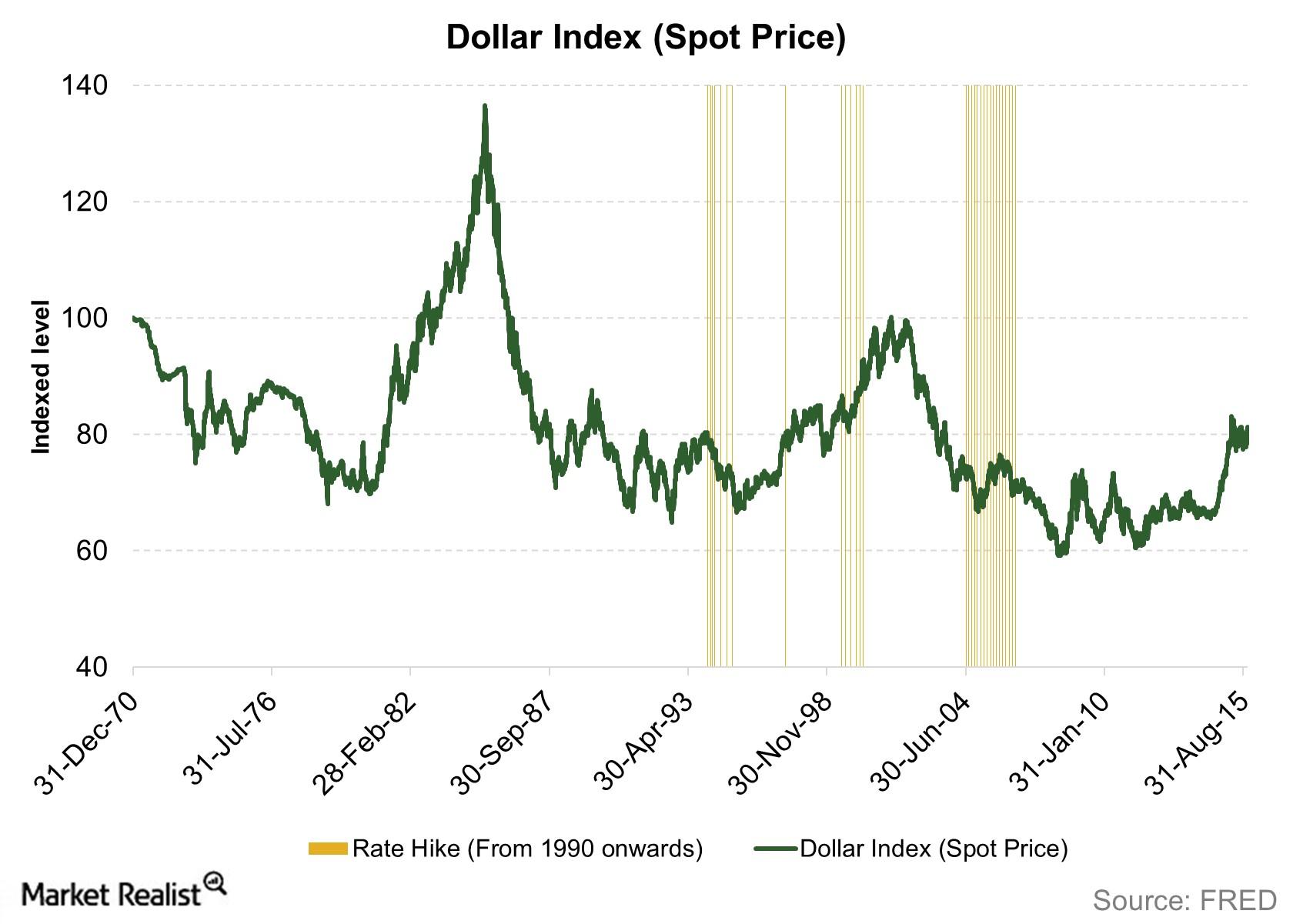 The first rate hike cycle began on February 4, 1994, with the last rate hike in the cycle made on February 1, 1995. This cycle, which saw seven instances of a rate hike, led to the dollar index falling by 9.3% in the period. The fall was nearly uniform through the period. The index continued to fall after the end of the rate hike cycle, and it was only able to rise above the level at the end of the cycle in January 1996. The index was only able to rise above its February 1994 level at the end of April 1997.

The second rate hike cycle began with a hike on June 30, 1999, and ended with a hike made on May 16, 2000. In less than one year, which saw the federal funds rate hiked six times, the dollar index gained 8.2%. Even after a few troughs, the index remained elevated until April 2002, after which time it started to decline.

But unlike the other two periods, this period saw 17 rate hikes. On nine of these instances, the index moved up for some time after the rate hike, but on the remaining eight, the index fell. Also unlike other the periods, the dollar index continued to seesaw after the rate hike cycle ended, rather than moving either up or down. As the financial crisis began to take hold, it started falling, but was able to sustain higher levels than the rate hike cycle in February 2009.

After several seesaw years and falls, the dollar index began gaining strength as oil prices started to fall in mid-2014. Its strength continues to grow to this day.

While the dollar conclusively fell during the first rate hike cycle, and while it rose conclusively during the second, its response to the elongated third cycle was mixed. Its fall was not sharp, but there was no appreciable rise mid-period that could lead it to positive returns either.

The fall in crude oil prices (KMI) (COP) (VLO) has pushed the greenback higher. Along with that, the anticipation of a rate hike continues to push the dollar even further north.

But what is different in 2015 from our three historic rate hike cycles is the fact that the US is the only nation looking at tightening its monetary policy, whereas almost everyone else in the rest of the world is continuing to accommodate and even expand stimulus initiatives. This opposite stance in monetary policies has provided a boost to the greenback. It wouldn’t be far-fetched, then, to conclude that a rate hike now, at the end of 2015, would likely push the dollar up even further.