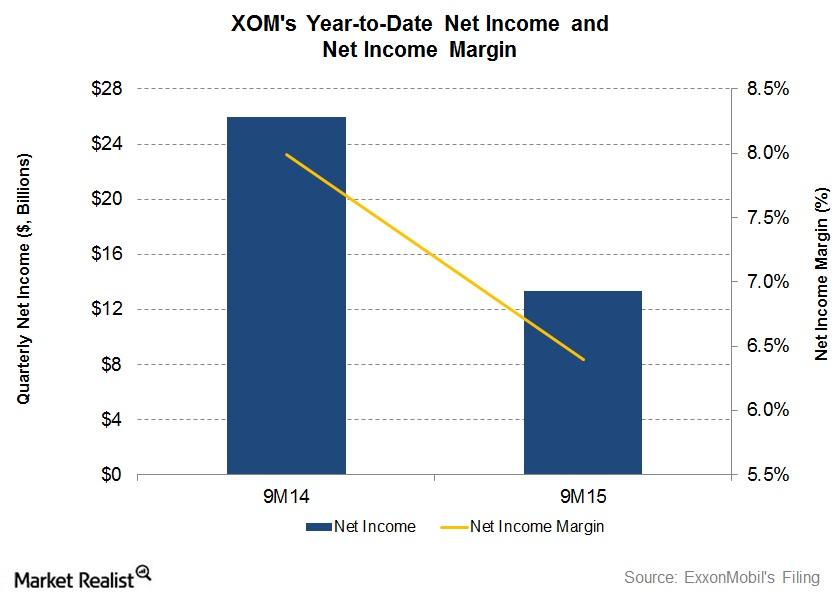 ExxonMobil’s 9M15 net income fell ~49% to $13.4 billion compared to $26.0 billion net income a year ago. Net income margin (net income as a percentage of its total revenues) fell to 6.4% in 9M15 from 8.0% in 9M14. The margin drop was less severe as a result of strong earnings growth in XOM’s downstream segment.

Year-over-year, ExxonMobil’s US earnings fell 62% in 9M15 compared to a 41% fall in XOM’s revenues from all its remaining international operations put together.

Volume growth was particularly visible in XOM’s crude oil production as a result of project ramp-ups and entitlement effects. Entitlement effects are changes to ExxonMobil’s production volumes share, which are caused by various non-operational factors. Overall, upstream earnings were down significantly by 72% during the same period.

In comparison, its downstream segment earnings more than doubled during 9M15 over the same period in 9M14. Most of the improvements came through ExxonMobil’s superior margins, partially offset by higher maintenance expenses and lower petroleum product sales. Earnings for the chemical segment increased 12% during the same period due to a better mix of higher margin products in XOM’s production portfolio.

Next, we’ll look at Wall Street analysts’ recommendations for ExxonMobil.