Apache announced its third quarter financial results on November 5, 2015. Apache’s adjusted net loss totaled $21 million, or $0.05 per diluted share. Wall Street analysts were expecting wider losses of $0.38 per share for Apache considering the year-long drop in oil prices. However, the company’s performance fell from the year-ago period with an adjusted profit of $1.27 per share. 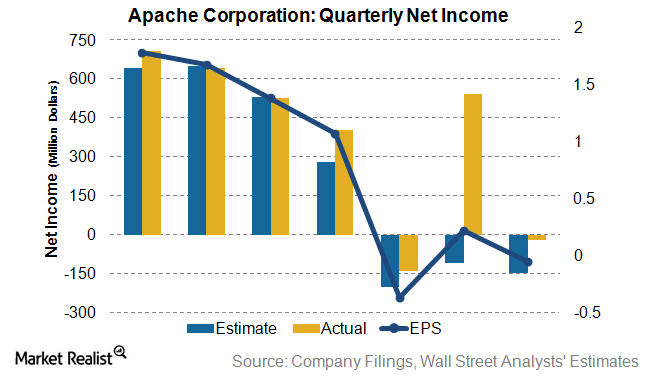 Strong production volumes may continue for Apache in the coming quarters due to new discoveries at the K, Corona, and Seagull wells along with two high-rate development wells in the North Sea, as per the press release on October 30, 2015. K, Corona, and Seagull combined have the reserve potential of 70 million barrels of oil (USO). This accounts for a potential 50% increase over 145 million barrels of total proved reserves considering the reserves at the end of 2014.

Apache had a strong liquidity position and held $1.7 billion in cash. Apache was also well positioned on the leverage basis. Its net debt was less than two times the adjusted annualized EBITDA (earnings before interest, tax, depreciation, and amortization) of 2015.

Apache is still feeling the heat

Oil explorers and producers continue to feel the heat due to lower realized prices. Companies are utilizing cash generated by operations for capital expenses and servicing debt. Therefore, the profitability of energy companies in North America has almost fallen to zero. Apache’s peer group includes Pioneer Natural Resources (PXD) and Marathon Oil (MRO), and these companies continued the same practice of hiking production growth by reducing capital spending to sustain themselves in the lower energy (XLE) price environment.