Enbridge Energy Partners (EEP) carries out its operations through two reportable segments: Liquids and Natural Gas. Its Liquids segment generates revenues through transportation and other services. On the other hand, commodity sales and transportation and other services contributed to the Gas segment’s revenues. In 3Q15, Enbridge Energy Partners’ Liquids segment contributed ~89% to its total EBITDA. 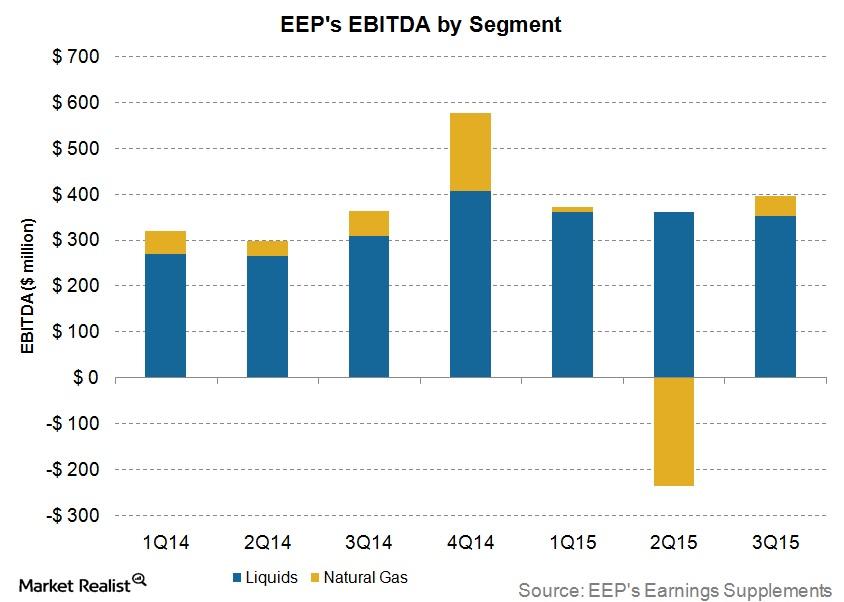 The above graph shows the segmental contribution to Enbridge Energy Partners’ EBITDA since the beginning of 2014. An increase in transportation rates and higher deliveries on the segment’s liquids pipeline systems contributed to its EBITDA growth compared to 3Q14.

The total liquids system deliveries increased 6.5% in 3Q15 over 3Q14. Increased contributions from growth projects placed into service in 2014 and 2015, including the Eastern Access Program and a phase of the US Mainline Expansion project, also contributed to the segment’s year-over-year EBITDA growth.

The segment’s EBITDA declined year-over-year in 3Q15. The decline was contributed by a decrease in natural gas system volumes. The decrease in volumes is primarily attributable to the continued low commodity price environment, which has resulted in reductions in drilling activity from producers in Enbridge Energy Partners’ areas of operations. Enbridge Energy Partners forms ~1% of the Guggenheim Multi-Asset Income ETF (CVY).