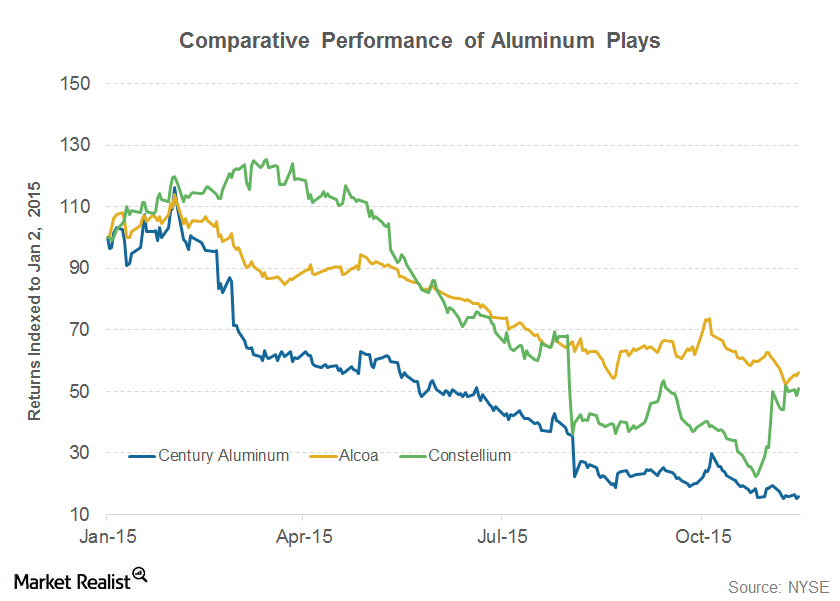 It’s been a lackluster year for companies operating in the commodities space (DBC). Aluminum prices dipped to six-and-a-half-year lows in 3Q15. Prices did recover somewhat during the beginning of September but again resumed their downslide to hit fresh six-and-a-half-year lows. Aluminum has looked the most vulnerable in the base metals space due to concerns over the Chinese aluminum exports. This is despite the fact that aluminum demand is still much stronger as compared to other metals including copper and steel.

In the above graph, you can see the recent movement in aluminum companies’ stock. 2015 has been nothing short of a nightmare for the aluminum industry. Alcoa (AA) and Century Aluminum (CENX) have lost 45% and 85%, respectively, so far in 2015. Constellium (CSTM) is down ~50% year-to-date.

South32 (SOUHY), which spun off from BHP Billiton (BHP), has also been on a losing streak since it was listed as a separate company. Alcoa is also planning to split into two companies in 2H16. Read Will Alcoa’s Splitting into 2 Companies Add Shareholder Value to learn more about the split.