ExxonMobil’s FCF (free cash flow) has been volatile in the past ten quarters. Crude oil’s price fall since 4Q14 reduced ExxonMobil’s cash flows. However, exploration and production spending cuts partially offset the negative effect of the falling operating cash flow on the FCF.

FCF is the operating cash flows less the capital expenditures. It represents the cash generated from regular operations that a company has left after spending what’s required to maintain or expand its asset base. 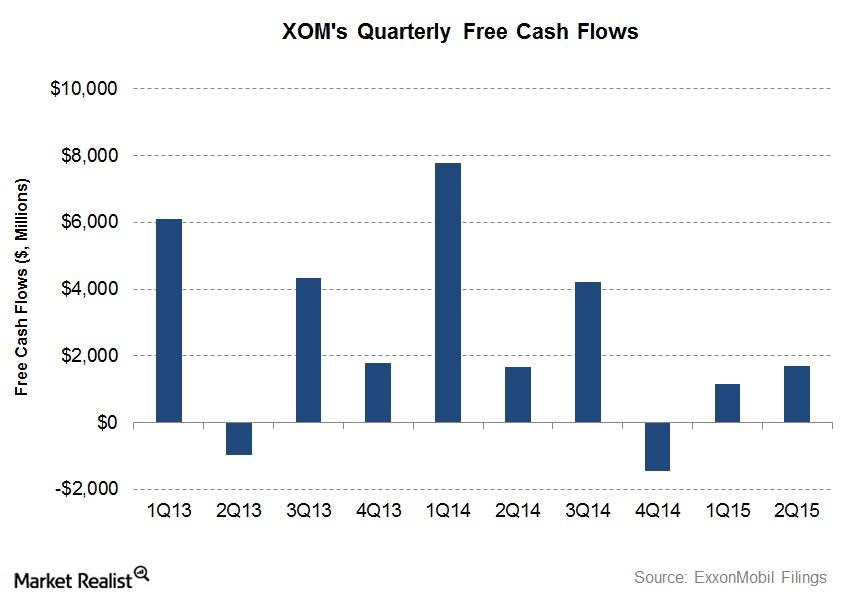 In 2015, ExxonMobil plans to spend less than $37 billion in capex—compared to $38.5 billion in 2014. However, the cash flow from operations is expected to be under strain due to lower energy prices and the weaker downstream margin. We’ve already discussed these in the previous parts. So, even if the capex falls, ExxonMobil’s 3Q15 FCF may not improve much compared to 2Q15.

Many other integrated energy majors have also cut down on the capex spend in 2015. Statoil ASA (STO) is an integrated energy producer based in Norway. It produces crude oil and natural gas in North America. Statoil’s 2015 projected capex stands at $17.5 billion—11% lower than its 2014 capex of $19.6 billion. ExxonMobil accounts for 1.9% of the SPDR S&P 500 ETF (SPY).