The company believes that a large-scale drop-down from Enbridge Inc. (ENB) will not be initiated in 2015 considering the current market conditions. This may strain its distribution growth. 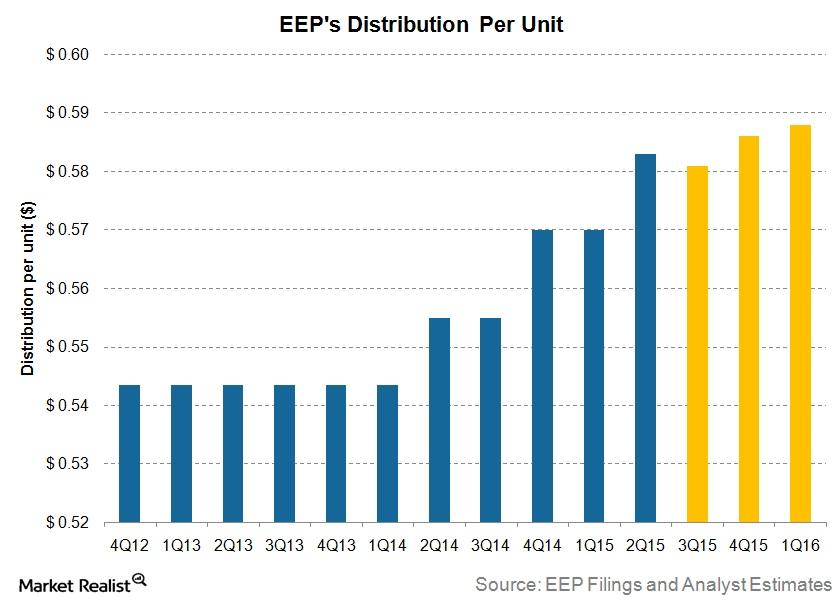 Enbridge Energy Partners expects its 2015 full-year coverage to be between 0.9 to 0.96 times. It aims for a long-term coverage ratio greater than 1.

Distribution coverage is the ratio of distributable cash flow to total distributions. A ratio below 1.0 is considered risky, as it shows that the MLP is distributing more cash than it’s generating. Clearly, this can’t continue in the long run. Enbridge Energy Partners’ low coverage ratio is most likely the reason for consensus estimates of a distribution cut in 3Q15. Despite not raising dividends in two quarters of 2014, its 2014 coverage ratio is 0.9.

The MLP had a debt-to-EBITDA ratio of 4.4x in 2Q15. It announced closing a $1.6 billion offering in senior unsecured notes on October 6, 2015. Enbridge Energy Partners forms ~1.6% of the Global X SuperDividend US ETF (DIV).