Could Pacific Drilling (PACD) go bankrupt? Will it be the next “Hercules Offshore” filing for bankruptcy protection this year?

As of October 15, 2015, Pacific Drilling has been eating through its backlog without replacing them with new contracts—a practice that’s deteriorating the company’s cash flow. With existing backlog how long the company can survive? What’s the company’s debt position, can it repay its debt on time, and is the company adhering its covenants?

We’ll explore answer all these questions and more in this must-read ten-part series on international offshore drilling giant Pacific Drilling. 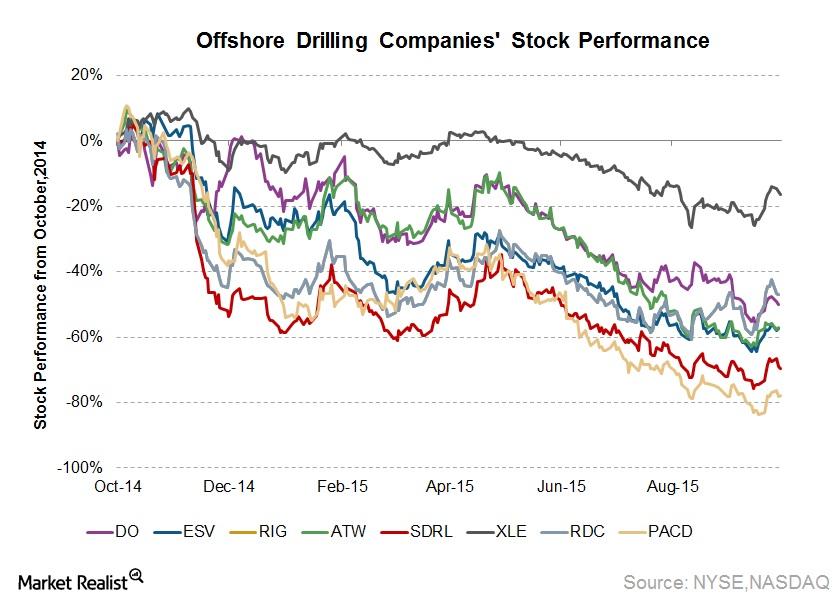 Since the beginning of October 2015, Pacific Drilling (PACD) and Seadrill have each gained 26% as of October 15. Over the same period, stock prices for Rowan Companies (RDC) and Transocean (RIG) rose by 24% each, while other companies such as Diamond Offshore Drilling (DO), Ensco (ESV), Noble Corporation (NE), and Atwood Oceanics (ATW) rose by 13%, 20%, 12%, and 17%, respectively.

Brent crude oil price reached $51.3 per barrel on October 7, 2015, up from September’s low of $46.4 per barrel. Crude oil prices highly influence the offshore drilling (OIH) industry, particularly rig demand and the drilling rates that exploration and production companies are willing to pay for drilling services. Even though oil prices have rebounded a bit, they are still below break-even prices.

According to Rigzone, the global utilization rate of crude oil slipped to 55% on October 18, 2015, compared to 57.5% one month prior and 65.4% % six months previously. These figures suggest that the supply and demand balance has not improved.

Pacific Drilling is an international offshore drilling company that owns and operates only seven rigs, though it operates some of the newest ultra-deepwater drillships. Its rigs mainly operate in Nigeria, the Gulf of Mexico, and Brazil. Chevron Corporation (CVX), Total, and Petrobras are its only customers.

Continue to the next part of this series for a look at Wall street analyst estimates for Pacific Drilling’s future revenues.