In its Drilling Productivity Report on October 13, 2015, the EIA (U.S. Energy Information Administration) estimated that the Marcellus Shale’s natural gas production totaled ~16.3 Bcf (billion cubic feet) per day in September. That’s a marginal decrease over August’s production level. However, it’s 6% greater than production a year ago.

Month-over-month, natural gas production growth rate in the Marcellus Shale has gradually fallen in the past eight months. 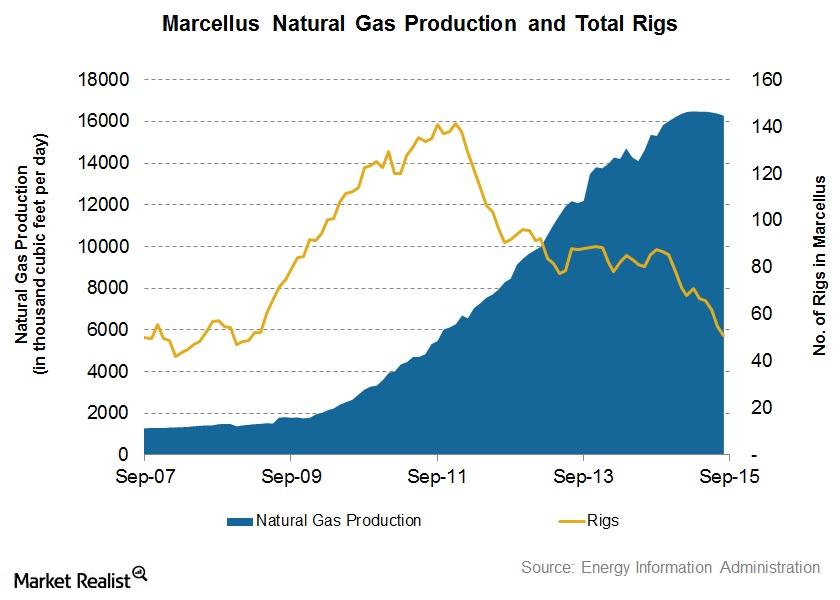 What it means for energy companies

Lower natural gas production in 2015 at the Marcellus Shale may negatively affect major oil and gas producers in the region. Producers in this region include EQT (EQT), Anadarko Petroleum (APC), and Consol Energy (CNX). EQT accounts for 0.8% of the Energy Select Sector SPDR ETF (XLE) and 0.8% of the Vanguard Energy ETF (VDE).

Rigs and monthly additions from one average rig

The number of active rigs in the Marcellus Shale decreased from 55 in August to 51 in September. A year ago, there were 85 drilling rigs in the region.

The EIA calculates that the average Marcellus shale rig added production of 8.6 million cubic feet of natural gas in September 2015, a 5% gain since September 2014. In the past eight years, the gain amounts to ~16x.

In the next part of this series, we’ll look at drilling efficiency at the Eagle Ford Shale.