Kinross’s guidance of $1,000 per ounce for 2015 is also the highest among the companies mentioned above. However, it’s important to note that Kinross recently lowered its average guidance from $1,050 per ounce to $1,000 per ounce. 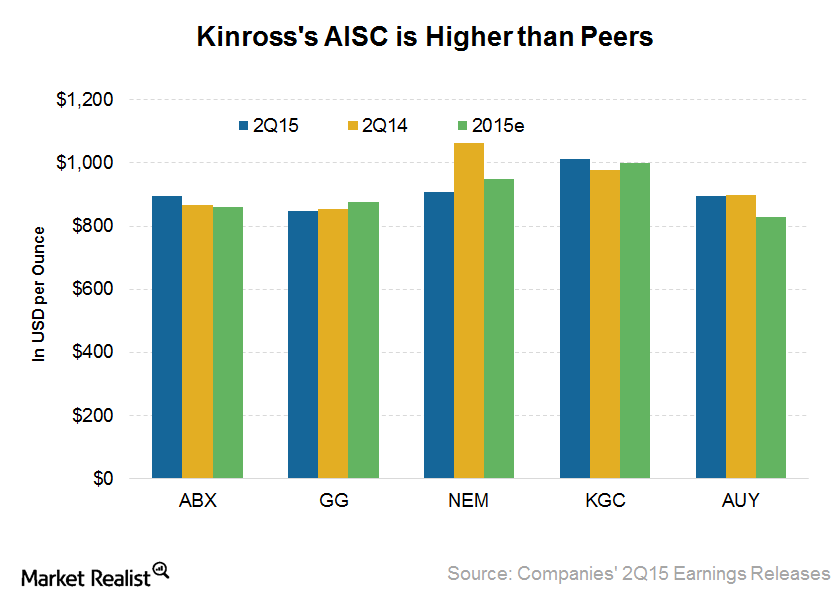 Like other gold miners, Kinross has also embarked on several cost-cutting initiatives to weather the current volatile metals price environment. These initiatives include a company-wide campaign to reduce inventories and working capital, self-perform mining, and mobile maintenance. Its supply chain team has also leveraged current market conditions to drive down costs for key inputs, such as grinding media, tires, and reagents.

While its costs are decreasing, they are still above those of its peer group. At current gold prices, Kinross’s margins are pressured more than most of its peers, who have started reporting lower costs. While all gold miners face the risk of lower gold prices, the high relative costs for Kinross exacerbates the risk of lower prices. Going forward, as its production base declines, the economies of scale advantage might also become eroded, leading to still higher costs.

Funds like the SPDR Gold Trust ETF (GLD) that track spot gold prices are also a good way to have diversified exposure to gold. The VanEck Vectors Gold Miners Index ETF (GDX) replicates the NYSE Gold Mining Index and is another way to invest in major and intermediate gold stocks. Yamana and Newmont form 3.1% and 6.1%, respectively, of GDX’s holdings.