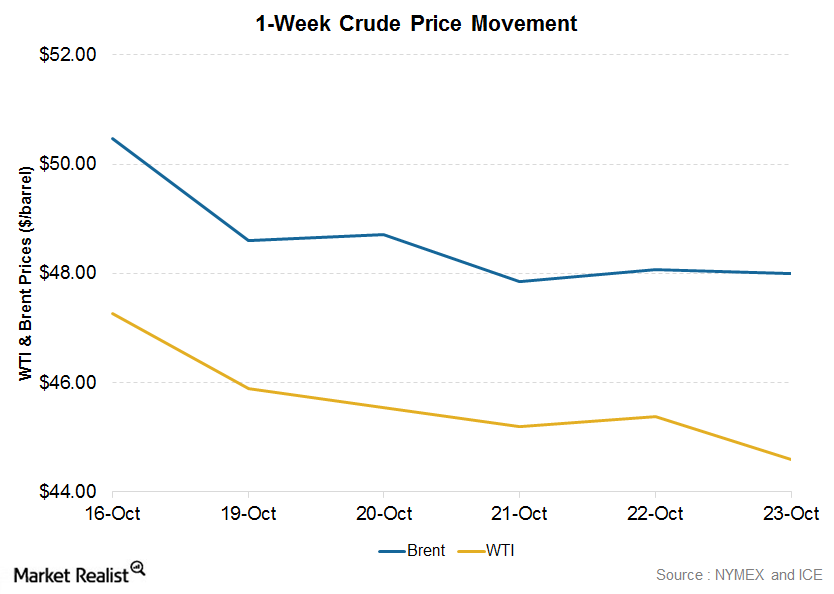 Lower crude oil prices are potentially negative for MLPs as well. MLPs such as Plains All American Pipeline (PAA) transport crude oil. Lower prices could eventually translate into lower transported volumes for these MLPs, and that could mean lower revenue.

Between Friday, October 16, and Monday, October 19, WTI crude oil prices fell ~2.9% to settle at $45.89 per barrel. Brent fell ~3.7% to settle at ~$48.61 per barrel. On Monday, there were indicators that there could be a nuclear deal—which could waive sanctions on Iran’s oil exports—before the end of the year. Iran’s oil minister said on Monday that he expects the country to boost production by 500,000 barrels per day in the months ahead.

On Wednesday, October 21, the U.S. Energy Information Administration (or EIA) released a bearish inventory showing a more-than-expected increase in crude oil inventories. However, markets were supported by data showing that refineries were running at higher levels than last week. This indicated that the seasonal maintenance season is likely coming to an end.

A bullish factor was a slight decline in inventories in Cushing as well as a decline in gasoline and distillate inventories. WTI fell 0.76% and closed at ~$45.20, while Brent fell 1.8% and settled at ~$47.85 on Wednesday.

Prices rose slightly on Thursday after the markets took a larger-than-expected decrease in gasoline and distillate inventories. WTI rose ~0.4% to settle at ~$45.38 per barrel, while Brent rose ~0.5% to close at ~$48.08.

However, at the end of the week, prices again fell due to the slowing pace of US oil rigs. The dollar surged after China announced its interest rate cut, which helped push prices lower. A stronger dollar makes dollar-priced commodities such as crude oil expensive for foreign investors.