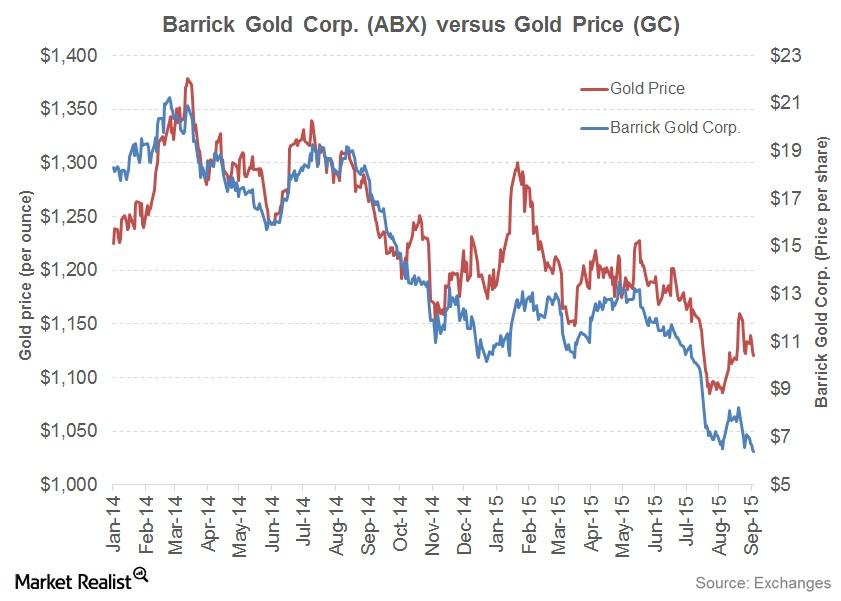 Though prices rose on Tuesday, October 20, 2015, the average trading volume for mining companies such as Coeur Mining (CDE), First Majestic Silver (AG), New Gold (NGD), and Barrick Gold (ABX) saw falls in volume. These four stocks together make up 10.2% of the VanEck Vectors Gold Miners ETF (GDX). The ETF rose almost 4% on October 20. Above is a chart of gold futures prices versus Barrick Gold prices.

Gold supporters hoped that it would push to $1200 per ounce after crossing the 200-day moving average mark. However, the undecided move on interest rates kept gold lower. Prices had been climbing since September 17, 2015, when the Fed announced a decision to keep rates unchanged.

International risks threatened to dent domestic growth and depress inflation. Gold had fallen marginally by 0.17% on a trailing-five-day basis. The fall in prices was likely influenced by strong US housing data backing the US dollar, pushing bullion prices downward.

Gold-backed ETF iShares Gold Trust (IAU) gained 0.80% on Tuesday, October 20, due to the gains in gold.