Volatility: No stranger to Freeport-McMoRan investors

Freeport-McMoRan (FCX) investors are no strangers to volatility. Freeport-McMoRan has a beta of 1.8, which generally means the stock has been more volatile compared to the broader markets (SPY). Having said that, companies in the commodity space tend to be more volatile. But then, commodity stocks have never been for the faint-hearted.

During upturns, commodity companies tend to outperform almost all other asset classes. Conversely, these companies bear the brunt of downturns when the economic takes a hit. 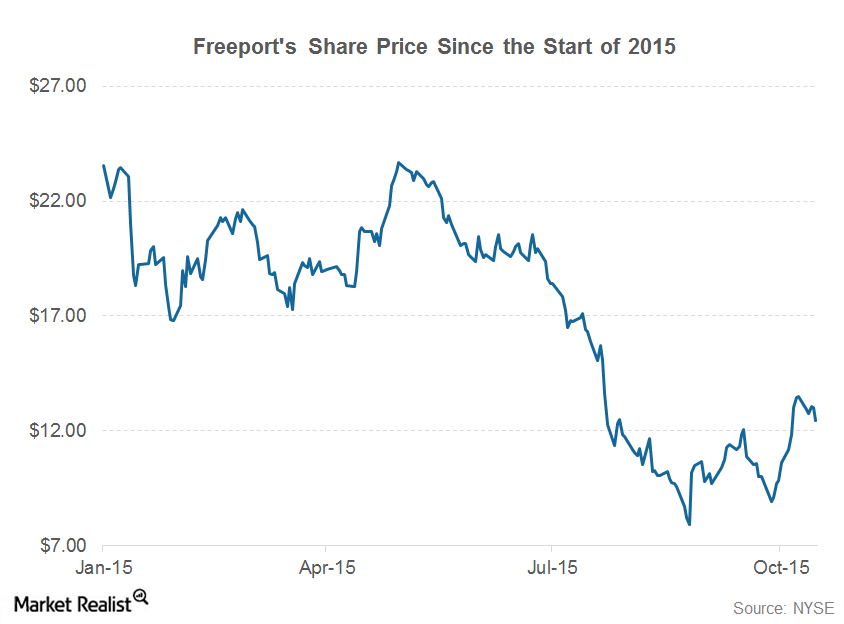 For investors in companies such as Glencore (GLNCY), Teck Resources (TCK), and Rio Tinto (RIO), this year has been the worst since the financial crisis of 2008–2009. The stocks have been languishing at multi-year lows for most of the year. There was a small recovery in mining shares toward the beginning of October. But the recovery was short-lived, and most mining companies corrected last week.

The graph above shows the recent movement in Freeport’s share price. Freeport fell 7.7% last week. Teck Resources corrected by more than 13%. In our previous series, we noted that the recovery in mining shares was mainly because we received no negative data points from China.

However, as China returned from the holidays, the downtrend in mining shares resumed. Although Chinese vehicle sales data were a positive surprise, the trade data disappointed.

This week, from October 19–23, 2015, Freeport-McMoRan investors should closely track several data points. They should also watch Freeport’s 3Q15 earnings, which are scheduled to be released on October 22. There’s also the Chinese PMI (Purchasing Managers’ Index) to watch on October 23. In this series, we’ll take a look at the factors that could drive Freeport’s share price this week. We’ll also explore how Freeport’s earnings could play out in 3Q15.

The data-heavy week has started with Chinese 3Q15 GDP (gross domestic product) growth numbers. We’ll look at it in detail in the next part of this series.