Overview of the FDN ETF

The First Trust Dow Jones Internet ETF (FDN) tracks a market-cap-weighted portfolio of liquid US internet companies. It tracks the performance of 40 publicly-listed companies in the technology sector. The market capitalization of the FDN ETF is $3.7 billion with an expense ratio of 0.57% and an average daily volume of shares traded at $39.8 million. The price-to-earnings ratio of the FDN ETF is 36.30x, whereas its price-to-book value ratio and distribution yield stand at 3.78x and 0.00%, respectively. 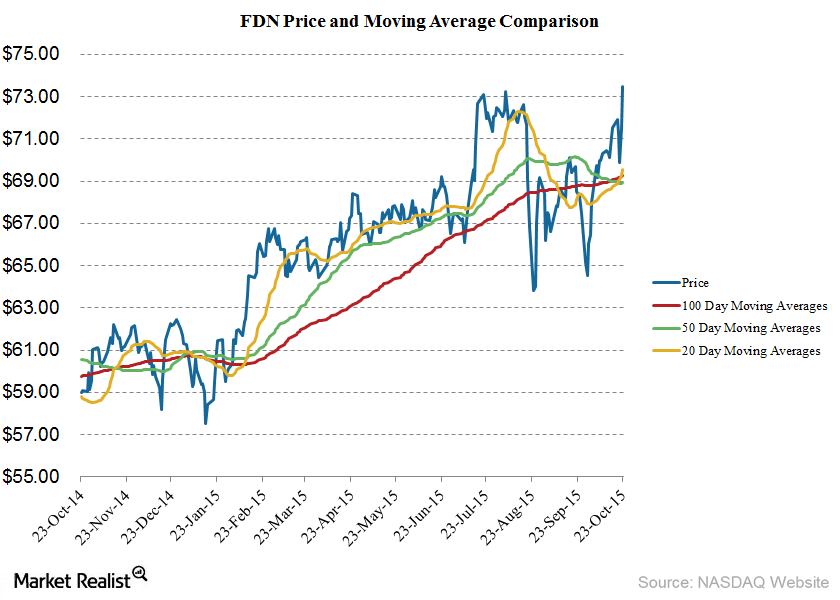 Fund flows in the FDN ETF

On October 23, 2015, the FDN ETF closed the trading day at $73.5. Based on this figure, here’s how the stock fares in terms of its moving averages:

The FDN ETF’s 14-day RSI (relative strength index) is 65.6, showing that the ETF is slightly overbought[1. Generally, if the RSI is above 70, it indicates the stock is overbought. An RSI figure below 30 suggests that a stock has been oversold.].