The Hershey Company (HSY) is a leader in the US confectionery market (XLP) (IYK), and it margins and profitability are on rise. Since fiscal 2007, the company’s gross margin, EBITDA (earnings before interest, tax, depreciation, and amortization) margin, operating margin, and net income margin have increased, with only a few exceptions. These margins have already surpassed the company’s pre-recession performance. 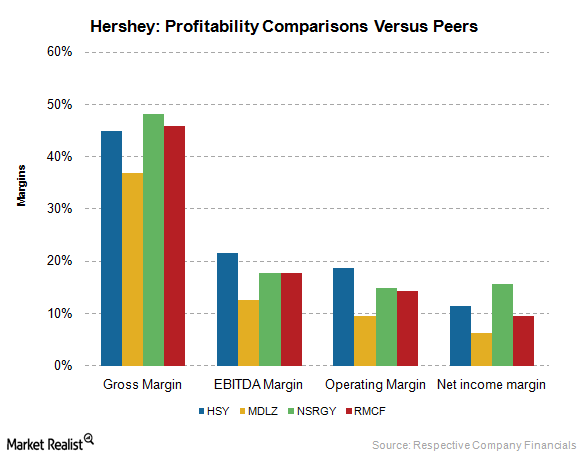 Hershey’s margins are on high side compared to Mondelez International (MDLZ), a major competitor in the confectionery industry, and Hershey has the highest EBITDA and operating margins among Mondelez, Nestle (NSRGY), and Rocky Mountain Chocolate Factory (RMCF). Nestle’s net income margin appears better, as it has a slightly different retail model, with a large product mix.

Hershey continuously focuses on growth initiatives and “margin-enhancing opportunities.” It completed a major project titled Project Next Century, for example, in fiscal 2014 (see Part 6 of this series for more detail). Improved supply chain operations are also expected to increase the company’s margins. In 2015, Hershey plans to focus on increasing productivity and cost savings.

In 2015, Hershey already reported the highest second quarter gross margin in the company’s history. Many confectionery companies are facing the problem of reduced gross margins, whereas Hershey’s margins continue to go up. In 2Q15, Hershey’s reported an adjusted gross margin of 46.7% and claimed that net price realization, supply chain productivity, and costs savings initiatives drove the margin growth.

Meanwhile, the company’s gross margins have been deleveraged due to increased advertising and marketing expenses. Hershey is focusing on marketing to support its core brands and to introduce its new products (see Part 5 of this series for more detail).

With its scale of business and quality of products, Hershey has the best cost-per-pound of chocolate compared to major manufacturers across the world. And since Hershey has the pricing power, it can attract higher gross margins. Additionally, Hershey expects gross margins for fiscal 2015 to grow by 135–145 basis points due to price increases in 2014.

But how do the specifics of Hershey’s financials stack up against its competitors? Continue to the next part of this series to find out.