On October 7, 2015, spot copper closed at $5,241 in the London Metals Exchange—its highest level since September 21. It’s been a nice run for copper so far in October, and prices are up ~3%. So what’s driving the recent uptrend in copper prices? Let’s see. 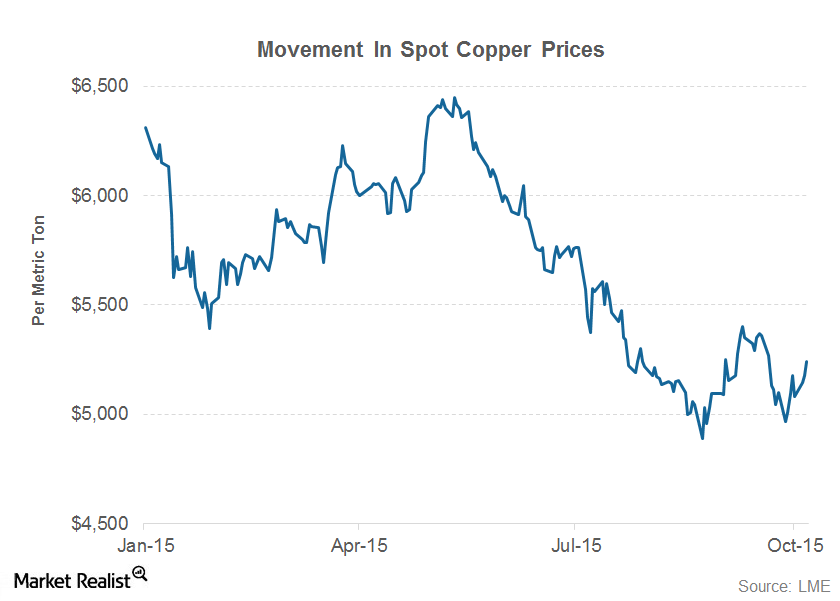 The chart above shows the recent movement in copper prices. Investors looking at a direct commodity exposure can also look at the PowerShares DB Commodity Tracking ETF (DBC).

The ICSG (International Copper Study Group) estimates that the copper market should be in balance for 2015. This basically means that copper’s supply and demand are expected to be roughly the same for this year. In its earlier forecast, the ICSG had estimated a production surplus of 360,000 metric tons for the current year.

The ICSG has an even optimistic estimate for the next year. It expects copper demand to outpace production in 2016, pushing the market into a deficit. In its earlier estimate, the ICSG had estimated a production surplus of 230,000 metric tons for 2016.

However, the ICSG also added a note of caution in its forecast, stating that “actual market balance outcomes have on recent occasions deviated significantly from ICSG market balance forecasts due to unforeseen developments.”

There has been no economic data from China over the first week of October 2015, on account of the country’s national holidays. But, as has been the case for last few quarters, no news from China is actually good news. However, there is a series of Chinese economic data scheduled for the next week. We’ll get China’s September vehicle sales and export data, which might throw some light on the nation’s economy.

China’s fixed asset investment and real estate indicators are also expected in the coming week. These data points could be the key drivers of copper prices in the coming days of October.

Meanwhile, Carl Icahn has won two seats on Freeport’s board. We’ll discuss more on this in the next part of the series.