In the week ended September 9, total US natural gas consumption fell 0.5% week-over-week. The fall was led by a 1.9% decrease in industrial sector consumption.

Residential and commercial consumption saw a decrease of 3.4% week-over-week.

Consumption for power generation rose 1% in the same period. We’ll look at trends in electricity generation in the next part of this series. 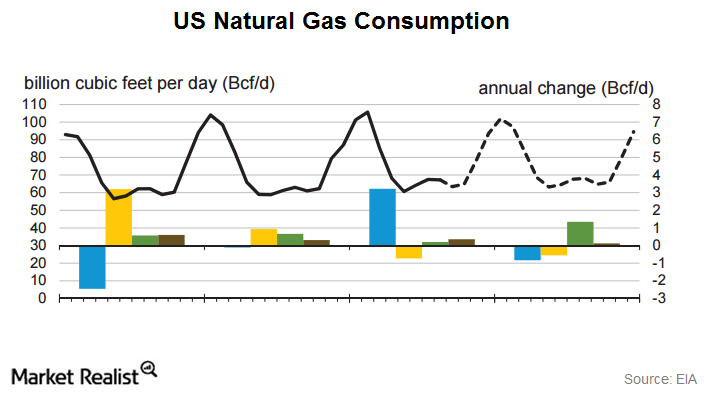 In its latest Short-Term Energy Outlook (or STEO) released on September 9, the EIA (U.S. Energy Information Administration) forecasts that total natural gas consumption will average 76.52 Bcf (billion cubic feet) per day in 2015 and 76.6 Bcf per day in 2016, compared to an estimated 73.5 Bcf per day in 2014.

The EIA forecast assumes that greater consumption in 2015 will result from increased demand from the industrial and electrical power sectors. Demand from the power sector is forecast to grow 14.4% in 2015. It’s then expected to fall 3.3% in 2016. Lower natural gas prices are expected to result in increased natural gas consumption for electricity generation in 2015. In the next part of this series, we’ll take a look at electricity generation trends.

Industrial consumption is forecast to rise 0.9% in 2015 and 6.4% in 2016 as a result of new industrial projects coming online, predominantly in the fertilizer and chemical sectors. Demand from the residential and commercial sectors is projected to fall in 2015 and 2016 because of better efficiency.