Currently, e-commerce is a very small part of Mondelēz’s (MDLZ) revenue base. The company’s sales from the web are estimated at less than $100 million. However, Mondelēz is aiming to increase that by about ten-fold. It’s targeting $1 billion in web sales by 2020.

In May, Mondelēz announced a partnership with Irish tech company, ChannelSight. Mondelēz aims to use ChannelSight’s buy flow technology to optimize e-commerce opportunities through brands’ web pages and social media sites, amongst others. Mondelēz is also getting “Buy Now” buttons enabled in 25 countries and 130 retailers globally. The company intends to forge relationships with key retailers (XRT) to drive sales. This would make it easier for consumers to purchase its products on the web. 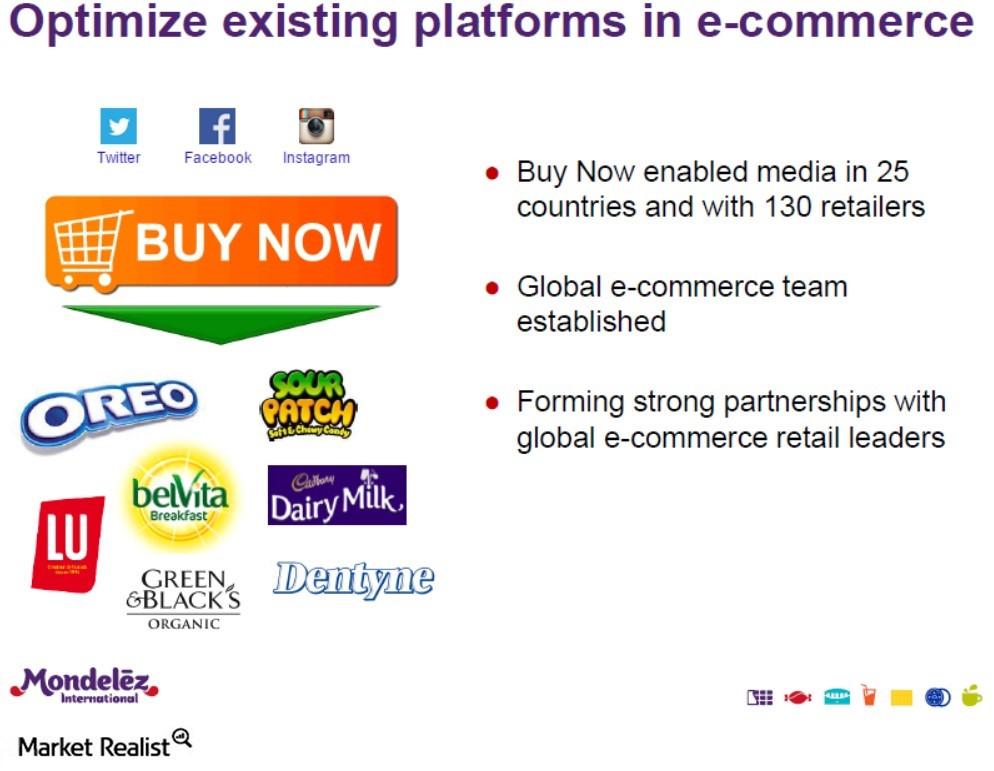 In June, Mondelēz announced it was renewing its strategic partnership with Facebook (FB). The agreement spans 52 countries including the US, United Kingdom, Brazil, India, Indonesia, the Gulf States, and France, among others. The partnership aims to drive higher video consumption and drive the impulse sales of Mondelēz products on the web.

Facebook could be the biggest online channel for Mondelēz’s online sales, according to Gerry D’Angelo. He’s the European Media Director at Mondelēz International.

Generally packaged food firms and other firms in the FMCG[1. Fast-Moving Consumer Goods] industry have been slow off the block when it comes to e-commerce. Mondelēz’s ~$100 million in web sales represents just ~0.30% of its total turnover of over $34 billion in 2014. According to Mark Clouse, chief growth officer, Mondelēz’s e-commerce sales are estimated to be 3%–10% of the total revenue earned by consumer packaged goods companies by 2020.

The higher incidence of single-family households has seen snacking rise as a substitute for meals[1. The NPD Group]. Also, millennials have gravitated towards healthier snack options. While these represent valuable sales opportunities for Mondelēz and its peers, it’s important that the company’s campaigns are geared for the opportunity. We’ll discuss this in the next part.