In the previous part of the series, we saw that Indian telecom (telecommunication) operators are investing heavily in the deployment of 4G (fourth generation) networks and in upgrading to 3G (third generation) networks. To support the adoption of 4G in India (EPI), manufacturers such as Motorola, Lenovo (LNVGY), Asus, and Xiaomi are introducing 4G smartphones in the low-to-mid price range. Intense competition among telecom providers to capture the 4G market will push down the tariffs and encourage adoption.

According to a Strategy Analytics survey, by 2016 India would surpass Japan (EWJ) to become the third largest 4G LTE (Long-Term Evolution) market in the world. An IAMAI (Internet & Mobile Association of India) and KPMG report expects that the number of 4G subscribers in India will grow at a compounded annual rate of 103% from 2013 to 2018. 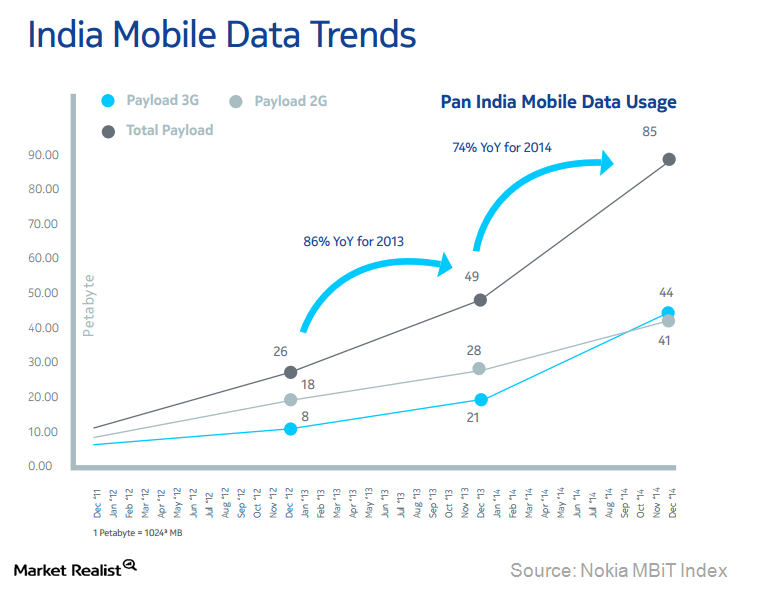 3G penetration picks up speed in 2014

India has been slow to adopt 3G technology due to high tariffs and the high cost of 3G mobile phones. However, 3G penetration picked up speed in 2014 when mobile operators lowered tariffs to match 2G (second generation) prices and low-cost 3G smartphones were introduced. Nokia’s (NOK) MBit Index study showed that 3G data usage grew 114% in 2014, accounting for 52% of total data consumed.

Bharti Airtel has launched 4G services in 296 towns and cities across India. Reliance Jio plans to launch its 4G services across 5,000 towns and cities and 215,000 villages in the first phase by the end of 2015. RealTime News Asia reported that Idea Cellular, Vodafone India (VOD), and Bharti Airtel are offering aggressive discounts on their 3G plans ahead of Reliance Jio’s launch.