Produced by J.P. Morgan (JPM) and Markit in association with the ISM (Institute for Supply Management) and the IFPSM (International Federation of Purchasing and Supply Management), the report indicated that global growth in the manufacturing sector fell to its lowest level in more than two years. 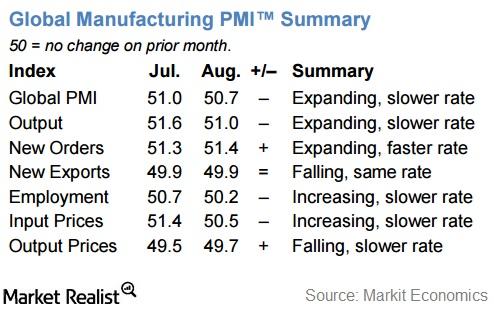 The report stated, “The Czech Republic, Italy, Spain and Germany recorded the fastest rates of output expansion during August. The US, due to its large relative size, was also a significant contributor to the latest increase in global manufacturing production, despite growth in the nation easing to a 19-month low. Conditions continued to strengthen in the eurozone, with output growth accelerating to a 15-month high. The main drags on the global average were contractions in China, France, Taiwan, South Korea, Indonesia, Malaysia, Russia, Greece and Brazil. There were some pockets of growth in Asia, however, with expansions in Japan, India and Vietnam.”

In this series, we’ll take you through these reports. Let’s find out where industrial activity is picking up and where it’s lagging in the next part.