Chile, the world’s largest copper miner, has been rattled by heavy rainfall for the second time in 2015. Operations at some of the key Chilean (ECH) copper mines were halted due to the heavy downpours. Major copper producers, including Southern Copper (SCCO), have operations in Chile. 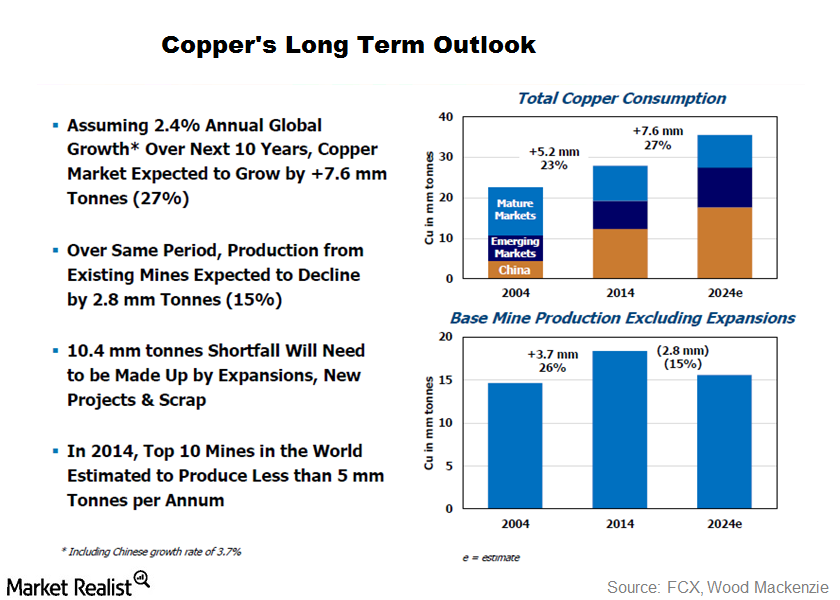 There has been a disruption in copper supply coming from Zambia as well. The country is going through a severe power crisis that has negatively impacted copper production.

However, over the long term, copper’s fundamentals look better in comparison to other industrial metals, including iron ore and steel.

Most analysts have long-term positive views on copper. Copper doesn’t face massive overcapacity like iron ore and steel. On the contrary, copper grades have been falling at existing mines. Copper producers would need to invest massive capital to move more and more copper mines to underground operations.

Freeport-McMoRan’s (FCX) Grasberg mine in Indonesia is expected to continue open pit operations until late 2017. Afterwards, Grasberg would be converted into fully underground operations.

Supply growth expected to be muted

Freeport expects copper demand to increase by 7.6 million tons over the next ten years. You can see this forecast in the chart above. However, it expects copper supply from existing mines to decline by 2.8 million tons over this period. Freeport’s estimates are based on Wood Mackenzie’s long-term copper outlook. The demand growth estimate assumes an average annual growth rate of 3.7% in Chinese copper consumption.

The growth rates don’t look unreasonable, though Chinese copper demand could be under pressure for the next couple of years.

Meanwhile, along with lower copper prices, Freeport faces another challenge in its deteriorating balance sheet. We’ll discuss this in detail in the next part of our series.