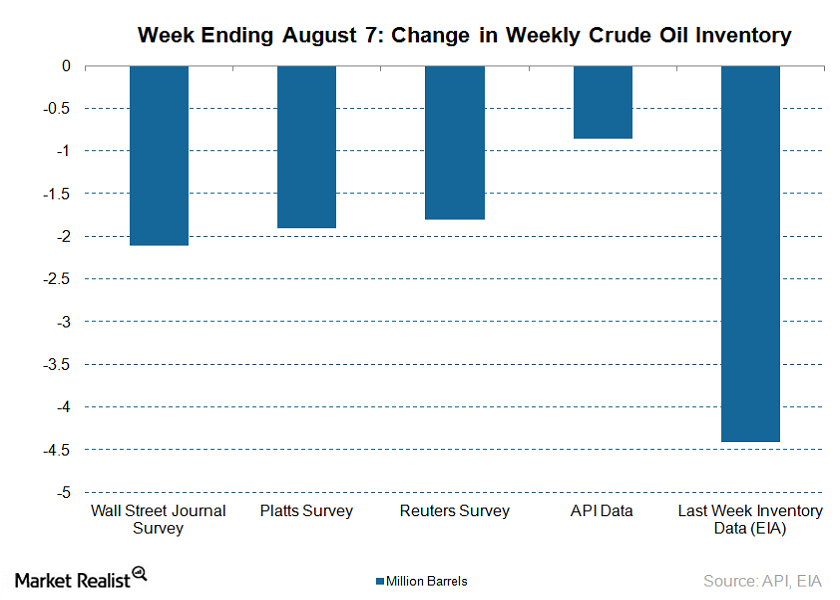 The API data is the precursor to the EIA’s (U.S. Energy Information Administration) crude oil stockpile report. The EIA report is expected to release on August 12, 2015, at 10:30 AM EST. The government report showed that the US commercial crude oil inventory fell by 4.4 MMbbls to 455.3 MMbbls for the week ending July 31, 2015.

For the week ending August 7, 2015, market surveys from Reuters to Platt’s project that crude oil inventories could fall between 1.8 MMbbls and 2.1 MMbbls, respectively.

Like crude oil, the gasoline inventory is also expected to fall by 0.647 MMbbls for the same period. In contrast, distillates inventories are estimated to rise by 1.25 MMbbls for the week ending August 7, 2015.

The consensus of the falling inventory implies that crude oil supplies are falling or demand is rising. The fall in inventories could be due to the fall in US crude oil imports. It could also be due to the rise in refinery demand during this period. The consequence is that this could support crude oil prices.

The crude oil stockpiles are 24% more than the level of 365.61 MMbbls in 2014. However, crude oil stocks are also near an 80-year high during this period of the year. This might negatively affect crude oil prices.