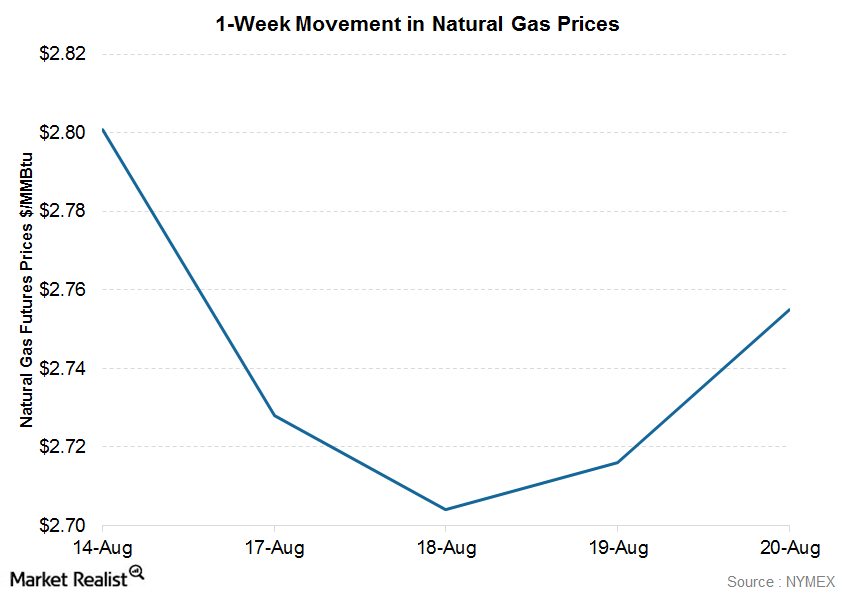 With lower prices, natural gas producers may be inclined to produce less. This would, in turn, be negative for the energy MLP sector, which includes companies such as MarkWest Energy Partners (MWE). Lower production would mean lower volumes to transport, which could reduce MLP revenues.

Natural gas prices on Monday, August 17, fell 2.6% from the previous Friday’s closing price of $2.801 per MMBtu. They settled at $2.728 per MMBtu. Prices fell on cooler weather predictions from Commodity Weather Group in the Midwest and South regions. Cooler weather reduces power demand for cooling purposes. Natural gas is a major fuel for power generation. Prices fell again on Tuesday as well. Prices fell by 0.87% to settle at $2.704 per MMBtu.

On Wednesday, prices climbed as a result of hotter weather forecasts. The US Climate Prediction Center forecasted above average temperatures along the US Gulf Coast and from Florida through Maine from August 26 through September 1. Prices increased 0.44% and settled at $2.716 per MMBtu.

On Thursday, prices rose again. They increased 1.43% to close at $2.755 per MMBtu. The increase was due to the EIA (U.S. Energy Information Administration) report, which showed a smaller-than-expected storage increase.

The following part of this series analyzes how various securities that are exposed to natural gas performed last week.