US, Canada, and Brazil

On August 11, 2015, the EIA (U.S. Energy Information Administration) released its monthly STEO (Short-Term Energy Outlook) report. The EIA estimates that crude oil production from the non-OPEC (Organization of the Petroleum Exporting Countries) countries will slow down in 2016.

The biggest fall will come from the US, according to EIA (U.S. Energy Information Administration) estimates. The EIA expects that crude oil and liquid fuel production could fall by 0.104 MMbpd (million barrels per day) in 2016—compared to a rise by 0.941 MMbpd in 2015. Likewise, production in Brazil and Canada is expected to rise marginally by 0.382 MMbpd and 0.056 MMbpd in 2016. The key catalyst would be the long-term lower crude oil prices. It could slow down the production. 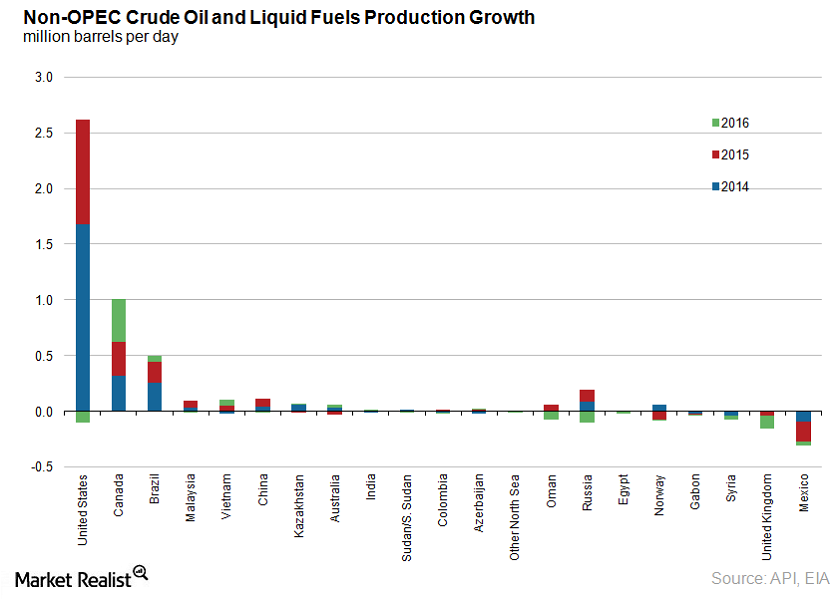 The IEA also expect demand to be robust in the next five years. This driven by lower crude oil prices, rising demand from India and South Korea, and record imports from China. Despite the rising consumption from the Asia heavyweights the supplies would outcast the demand in 2015 and 2016. The record production from Saudi Arabia, Iran, Iraq, and Russia as well as speculation of a Chinese slowdown will widen the supply and demand gap.