Pay-TV subscribers may be watching more content online because over-the-top subscriptions provide them with program schedule flexibility, the ability to skip commercials, and access to sequential episodes. These consumer preferences have been helped along by faster video streaming and increased innovations in Internet-connected devices like Google’s (GOOG) Chromecast and Apple (AAPL) TV.

According to a Digitalsmiths report for 1Q15 conducted among 3,144 consumers, around 60% consumers are spending over $100 per month on bundled services from pay-TV operators. Comparatively, Netflix (NFLX) offers the cheapest subscription, at ~$8 to $11 per month.

Netflix is a major OTT (over-the-top) player for online content streaming. Netflix had ~65 million members at the end of the second quarter of 2015, with 42 million members in the US. Hulu is another OTT player that is jointly owned by The Walt Disney Company (DIS), NBCUniversal (CMCSA), and Fox Entertainment Group. 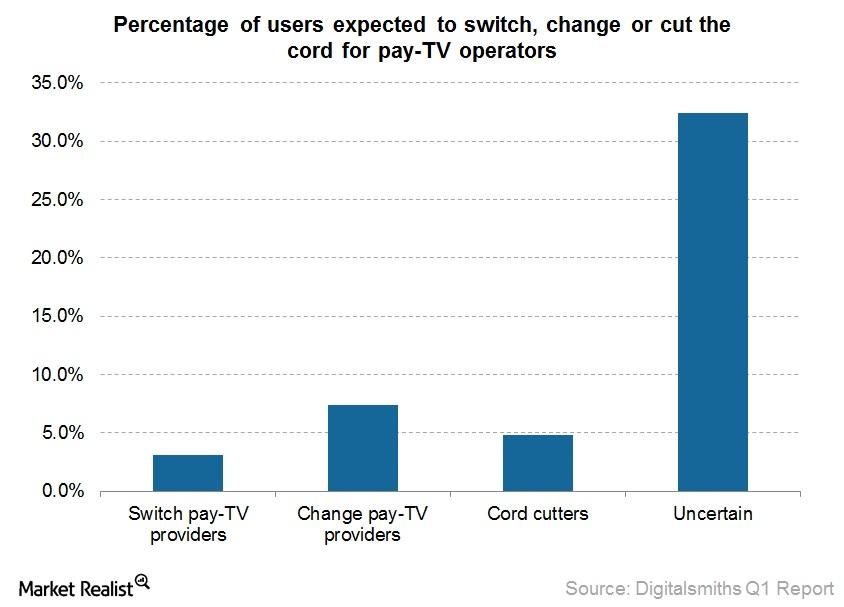 According to a report by Digitalsmiths for 1Q15 conducted among 3,144 consumers, over a period of the next six months, a total of 15.3% respondents are expected to switch, change, or cut the cord entirely for their pay-TV providers, while 7.7% of the users have already changed their pay-TV providers in 1Q15. However, 32.4% users are still undecided about their pay-TV operator. This report reinforces the fact that many consumers are moving from television to online video-streaming services such as Hulu and Netflix.

Netflix’s strong original content may explain its increasing popularity. This factor that can be gauged by the fact that a large number of its viewers indulged in binge viewing its Season 3 opening of Orange is the New Black—despite the NBA (National Basketball Association) finals on that same day.

You can gain a diversified exposure to Netflix by investing in the First Trust DJ Internet Index Fund (FDN), which holds 5.62% of the stock.