Freeport-McMoRan (FCX) touched its 52-week low on August 7 before closing at $11.65—up 10.64% from the previous day’s close. Prior to this, the stock has traded weakly, reaching new lows almost every day. 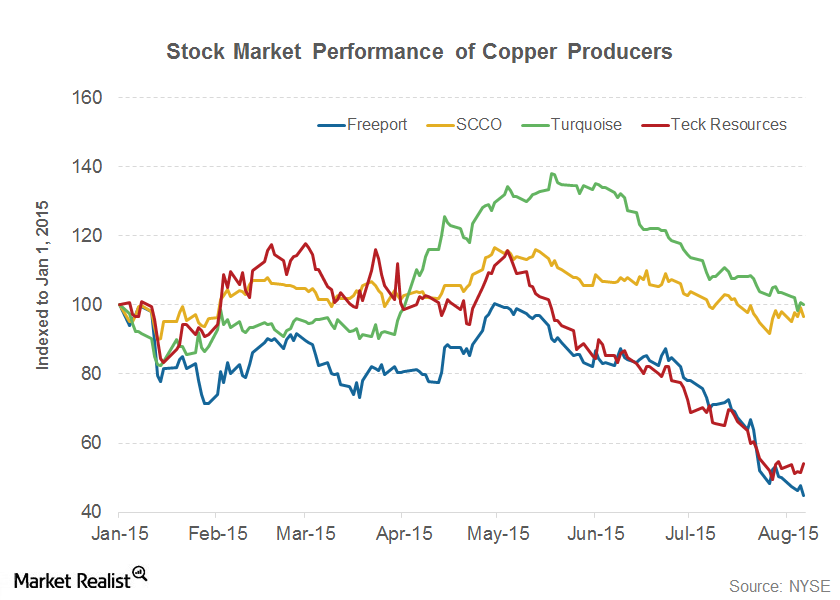 The above chart shows the recent stock market performance of copper producers. Freeport has lost more than 50% since the beginning of the year. It currently trades at less than one-third of its 52-week high of $37.10 per share.

Teck Resources (TCK) has lost ~45% since the beginning of the year. Along with copper, Teck Resources is also involved in coal mining. Its coal segment has been under severe pressure on subdued Chinese demand. China’s steel demand is expected to contract this year. The slowdown in China’s steel demand has negatively impacted the fundamentals of iron ore and coal, which are used in steel production.

Southern Copper (SCCO) has bucked the trend and managed to hold relatively steady amid global commodity carnage. Its share price is down ~2% so far in 2015. This is much less than other companies in the metals and mining space (XME).

Metal shares, including Alcoa and BHP Billiton (BHP), seem to defy all laws of gravity and lift. At a time when the broader US markets (VTI) are trading near their all-time highs, metal shares seem to be headed southward.

In this series, we’ll look at some of the key indicators that Freeport investors should track. This should help you understand where Freeport could be headed in the coming months.

Let’s begin by looking at the recent trend in copper prices in the next part of this series.