Previously, we saw that AK Steel’s (AKS) cash conversion cycle came down in 2Q15. However, its days receivables outstanding increased in the quarter. Looking at the tough steel market conditions, buyers have a lot of negotiation space with steel producers. They can negotiate for longer payment terms with steel companies. This could be the reason why AK Steel’s outstanding payables increased during the quarter. Currently, AK Steel forms 2.85% of the SPDR S&P Metals and Mining ETF (XME). 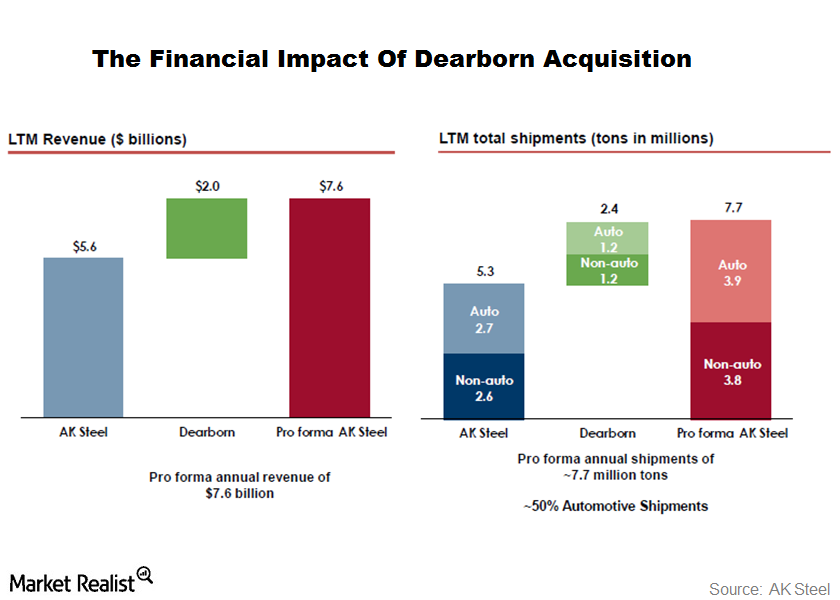 AK Steel’s inventory levels came down in 2Q15. Lower inventory levels are partially attributable to better working capital management at Dearborn Works, which AK Steel acquired last year. According to AK Steel, it has realized synergies worth $27 million in the first half of 2015 from the integration of Dearborn Works.

The management is hopeful that it will realize $50 million of synergies in 2015. This represents a twofold increase over AK Steel’s previous guidance. The above chart shows the pro forma financials of Dearborn Works.

AK Steel has also received a favorable decision in its dispute with DTE Energy. The dispute relates to overcharging for electricity at the Dearborn plant. After the resolution of this dispute, AK Steel expects to recover $25 million from DTE Energy.

In its 2Q15 earnings call, AK Steel made a spirited case for the company’s outlook. We’ll discuss this in detail in the next part of the series.