Russia produced 10.65 MMbpd (million barrels per day) of crude oil in July 2015—compared to 10.71 MMbpd in June 2015—according to sources from the Russian Energy Ministry. Russia is the largest crude oil producer. The fall in the crude oil output was due to the fall in condensate production. 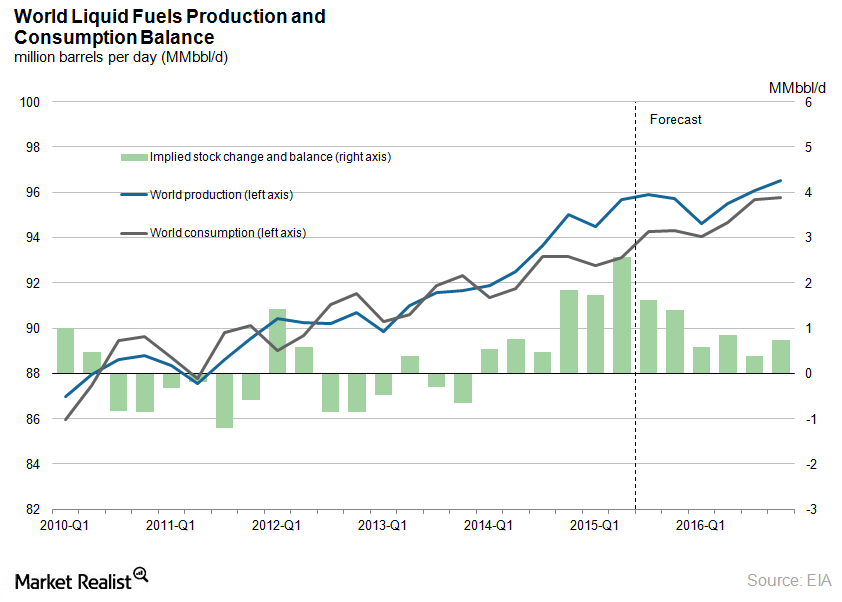 Likewise, the US weekly crude oil output fell slightly by 145,000 bpd (barrels per day) to 9.413 MMbpd (million barrels per day) for the week ending July 24, 2015, according to EIA (U.S. Energy Information Administration) sources. OPEC’s (Organization of the Petroleum Exporting Countries) crude oil production fell marginally to 32.107 MMbpd in July 2015—compared to 32.469 MMbpd in June 2015—according to Bloomberg data. The slight fall in output was due to the fall in output from Iraq.

China’s crude oil imports rose in June by 31% to 7.18 MMbpd—compared to May 2015—according to data from the Chinese General Administration of Customs. Chinese imports hit a 19-month low in May 2015. The Chinese demand was coming from the newly built inventories. It benefited from lower crude oil. It isn’t the usual economic growth-driven demand.

Four-week US imports were at 7.165 MMbpd for the week ending July 3, 2015, according to EIA sources. The refinery demand was driving US crude oil imports. The US and China are the top two crude oil importers.

The consensus of slowing demand from China, the US, Japan, and Europe will continue to negatively impact crude oil prices in the short term and long term. This could widen the gap between supply and demand.