Previously, we saw that the Model-3 would be crucial to Tesla’s success. To be fair, Tesla (TSLA) does not have any real competition currently. As we noted in part 3, no other pure electric car has a driving range matching that of Tesla. Add Tesla’s product features and innovation, and you get a car with practically no competitor.

However, Tesla’s Model-3, which would be launched in a couple of years, is expected to face stiff competition from Chevrolet Bolt. 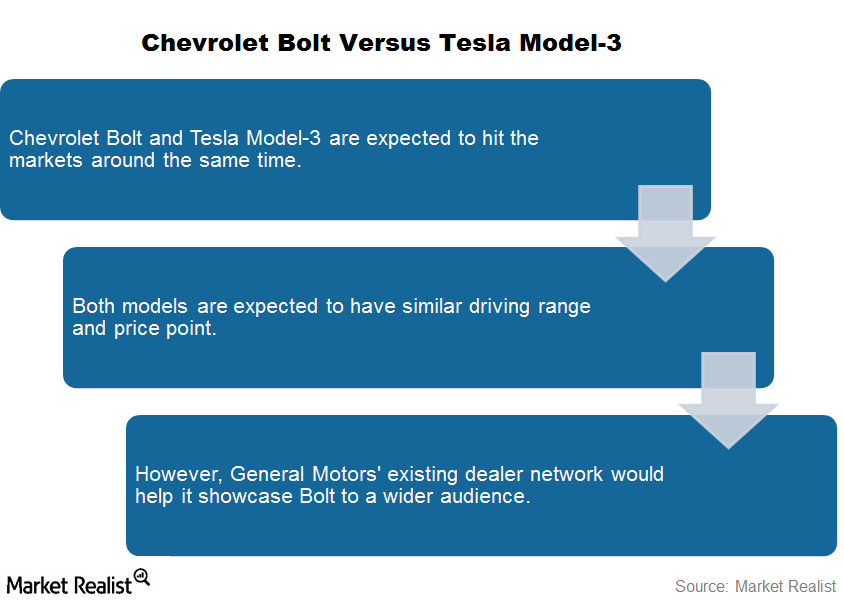 Could Bolt compete with Model-3?

Chevrolet Bolt would be launched in 2017, around the same time as Tesla’s Model-3. However, according to a Wall Street Journal report, General Motors (GM) has taken a lead by releasing the early prototypes of Bolt. The Bolt, which could be priced around $30,000 after federal incentives, is stated to have a driving range of 200 miles.

The Tesla Model-3 and Chevrolet Bolt would target the same customer segment. With a similar driving range and price point, it will be interesting to see how Tesla competes with its much bigger competitor.

Previously, we discussed that Tesla has chosen to follow a direct sales strategy, unlike that of other automotive companies such as Ford (F) and Fiat Chrysler (FCAU). However, with more than 4,000 dealers in the US (SPY) alone, General Motors can showcase its vehicles to a much wider audience.

Finally, the competition would boil down to what product Tesla and General Motors come up with. Until now, automakers have not really gone full throttle on the electric vehicle, or EV, concept. It’s only after Tesla’s success that automotive companies have started to take EVs seriously.