Previously in this series, we discussed the 2Q15 financial performance of ArcelorMittal’s (MT) steel operations. In this part, we’ll analyze the results of the company’s mining segment. ArcelorMittal is among the top five iron ore miners. Rio Tinto (RIO), BHP Billiton (BHP), and Vale S.A. (VALE) are the other leading iron ore producers. The SPDR S&P Metals and Mining ETF (XME) is an alternate way to play the diversified metals industry. It invests ~35% in steel companies like these. 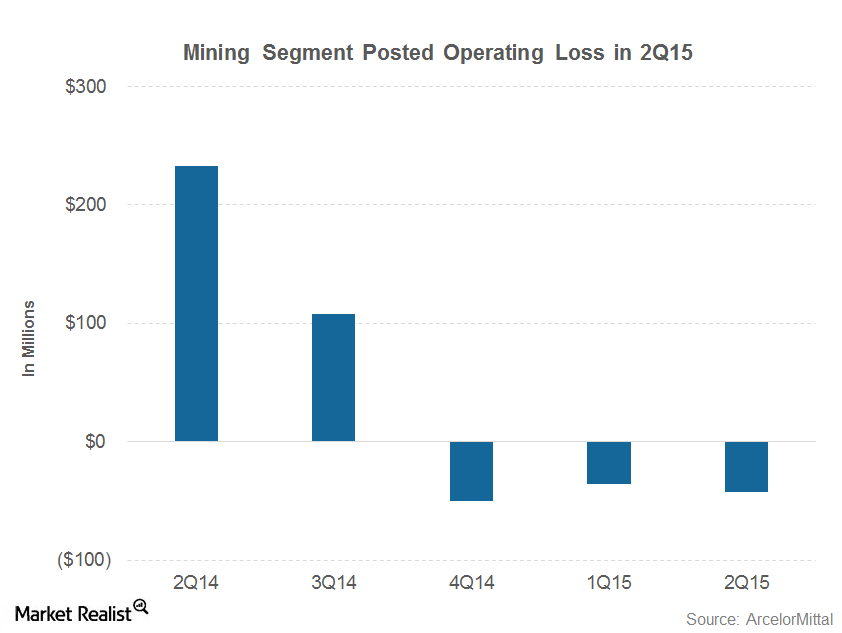 The chart above shows the performance of ArcelorMittal’s Mining segment. As you can see, the segment has posted an operating loss for three consecutive quarters. Benchmark iron ore prices corrected by almost half in 2014. They have continued their downward journey, falling ~ 20% this year also. Falling iron ore prices have severely affected mining companies’ profitability.

ArcelorMittal is working to bring down the cash costs in its iron ore operations. The company was able to partially offset falling iron ore prices by aggressive cost-cutting measures. As a result, its earnings in 2Q15 were similar to 1Q15 despite the fall in iron ore prices.

ArcelorMittal (MT) consolidates its African and Commonwealth of Independent States (or CIS) operations under one reporting segment. In Africa, the operations mainly focus on South Africa, while in the CIS, it has exposure to countries like Kazakhstan, Ukraine, and Russia

The segment posted an operating loss of $18 million in 2Q15 compared to a profit of $25 million in the same quarter last year. Most countries in the ACIS region are witnessing economic slowdowns. This trend has negatively affected MT’s performance in the region.

In the next part of this series, we’ll analyze ArcelorMittal’s outlook.