In the previous parts of this series, we learned about the robust year-over-year (or YoY) growth in Apple’s (AAPL) iPhone sales during fiscal 3Q15. We also learned that Mac sales grew despite a shrinking global PC market during the quarter. On the other hand, the iPad continued its YoY decline in terms of sales.

Now we will look at the performance of another key segment during the quarter. Apple’s services division revenue grew ~12.1% YoY to ~$5 billion. It represented ~10.1% of Apple’s revenue in fiscal 3Q15. Apple’s App Store was the key growth driver of the segment. 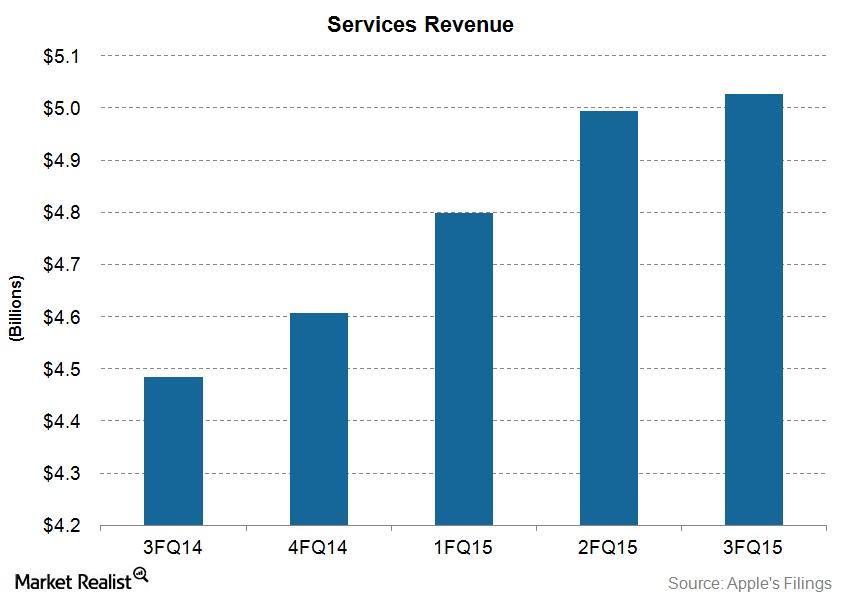 Revenue from Apple’s App Store grew robustly by ~24% YoY during fiscal 3Q15. Plus, more customers made transactions on the App Store on a YoY basis. These customers increased by a robust ~19% YoY during the quarter.

According to App Annie, Apple’s revenue from the App Store was 70% higher than revenue from Google (GOOG) (GOOGL) Play in fiscal 2Q15. However, Google Play experienced 70% more downloads than Apple’s (AAPL) App Store in the quarter, according to a Wall Street Journal report. Thus, Google Play continued to win in terms of number of downloads, but Apple’s App Store won in terms of revenue during the June quarter. Google Play experienced 85% more downloads than Apple’s App Store in 2Q15, or Apple’s fiscal 3Q15.