Oil rebounds and the CPI gains in the United States

The revival in oil prices after 1Q15 helped the CPI (consumer price index) inflation rate in the United States(SPY)(IVV) reverse its falling trend. Gasoline costs rose by about 3.4% in June. Crude oil (USO) was trading at around $45 per barrel in mid-March this year. Crude oil largely remained in the range of $58–$62 in June. The rise in fuel costs was certainly bad news for energy companies (XLE) such as Transocean (RIG), Chesapeake Energy (CHK), and CONSOL Energy (CNX). But the resulting fall in household disposable income also hurts consumer firms such as Best Buy (BBY) and Staples (SPLS). 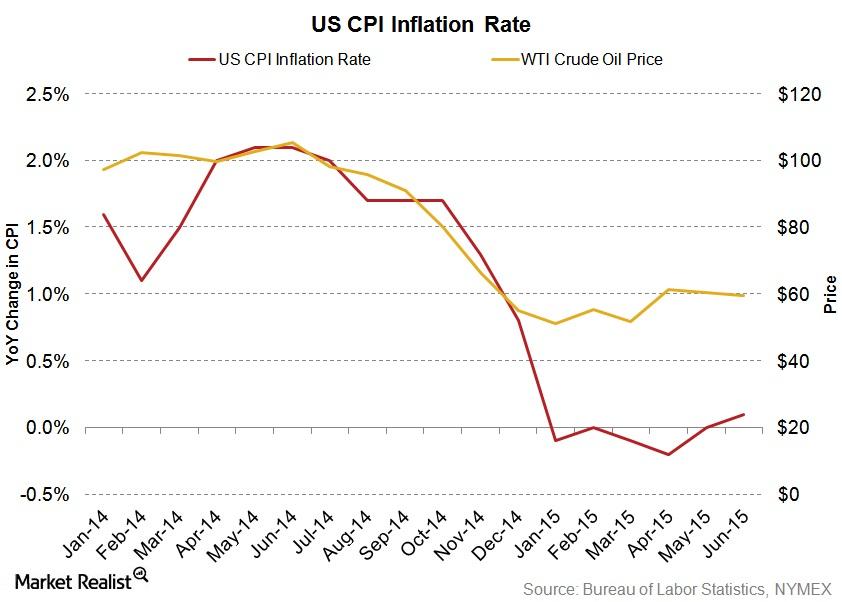 US CPI inflation rose 0.3% in June

According to a Bureau of Labor Statistics report dated July 17, 2015, overall CPI inflation rose to 0.3% in June compared to a 0.4% rise in May. On a YoY (year-over-year) basis, the headline CPI edged higher in June 2015. The YoY figure in the previous month stood at 0.1% in June versus May’s 0%.

Core CPI inflation excluded volatile food and energy prices. In June 2015, it rose by 0.18% over the previous month and by 1.8% over the same month last year. The core CPI gained from May’s figures on a month-over-month basis and on a YoY basis. The difference between the core and headline numbers highlights energy prices’ economic role in affecting consumer prices. The SPDR S&P 500 ETF Trust (SPY) rose 0.08% on the news at the close of trade on July 17. So far, SPY has returned 3.37% this year.

Food was expensive and apparel was cheaper in June

At a component level, food costs rose 0.3% in June, with egg prices up 18.3% in the month. A 2% rise in airfares was a direct consequence of the rise in oil prices. Tobacco also became costlier, by 0.8%. Hospital services were cheaper, by 1.1%, while apparel costs fell 0.1% in June.

While consumer prices lifted in June, consumer sentiment seems to be weakening in July. Find out more in the next part of this series.