SunEdison (SUNE), formerly known as MEMC Electronics Materials, was founded in 1984 in Delaware as a silicon wafer manufacturer for the semiconductor industry. In 1995, the company went public. MEMC acquired SunEdison LLC in 2009, and the name change took place in 2013 after the company shifted its focus toward solar energy. 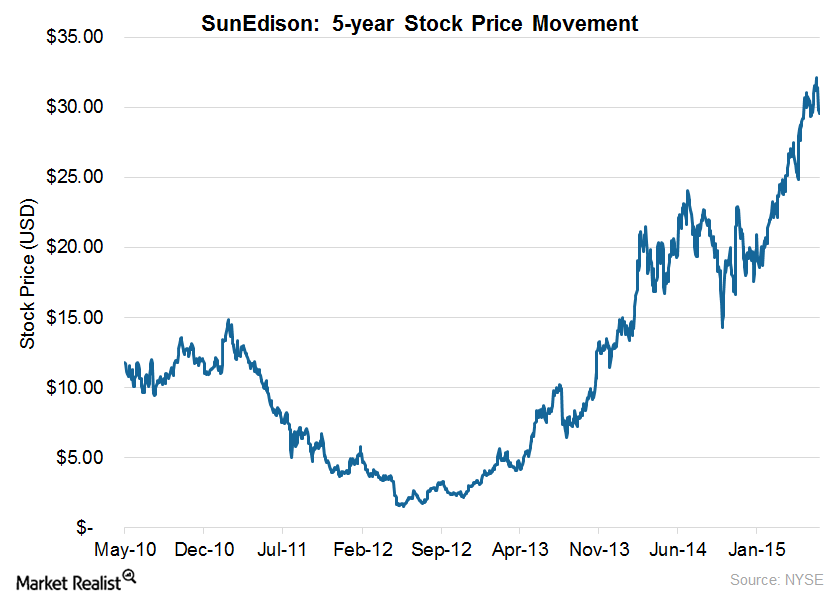 In 2012, solar stocks saw a steep decline and sell-off due to an industry-wide oversupply, which led to falling revenues and lower margins. Most stocks have since recovered. In line with the industry-wide revision of solar stock prices, SunEdison’s stock price rose 623%, going from just over $4.00 in January 2012 to $29.59 as of July 1, 2015.

The company’s primary business activities are divided into its three segments: the Solar Energy segment, the Semiconductor Materials segment operated under the publicly subsidiary SunEdison Semiconductor Ltd. (SEMI), and TerraForm Power operated as a yieldco under Terraform Power (TERP). To find out more about these segments, read on to the next part of the series.

SunEdison’s key competitors in the solar energy business include renewable energy providers NRG Energy (NRG), NextEra Energy (NEE), SunPower (SPWR), First Solar (FSLR), Solar City (SCTY) in the US and Enel Energia, E.On, and JUWI Solar in Europe. Because SunEdison produces energy from its own projects, it competes directly with renewable energy production of large utilities like NRG Energy and NextEra Energy. These two companies, along with SunPower and First Solar, all have launched their own yieldcos, or have plans to do so in the near term.

Key competitors of the semi-conductor business include established manufacturers Shin-Etsu Handotai, SUMCO, Siltronic, and LG Siltronic. Each of these competitors is based outside the US.

Despite a steep climb in its stock price, SunEdison’s earnings have been either very low or negative since 2009. In subsequent parts of this series, we will address the causes of the company’s suffering profitability, as well as its potential for future turnaround.