Lower natural gas consumption is bearish for natural gas prices (UNG), which is negative for gas producers like Devon Energy (DVN), Noble Energy (NBL), Range Resources (RRC), and Antero Resources (AR). These stocks are components of the iShares U.S. Energy ETF (IYE), and they make up ~3% of the ETF. 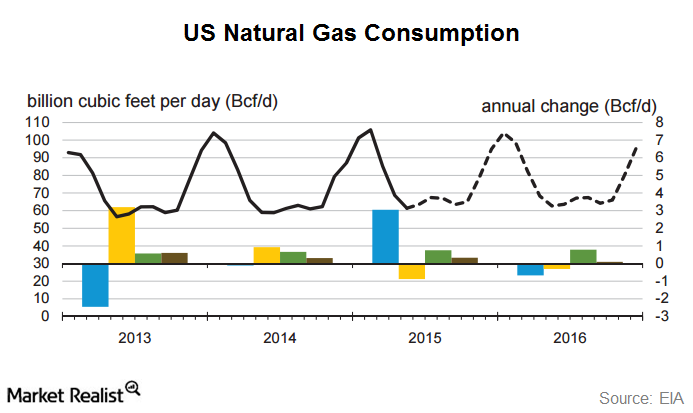 The EIA’s (Energy Information Administration) STEO (“Short-Term Energy Outlook”) released on June 9 forecasts that total natural gas consumption will average 76.7 bcf/d (billion cubic feet per day) in 2015 and 76.6 bcf/d in 2016 compared to an estimated 73.5 Bcf/d in 2014.

Industrial consumption is forecasted to increase by 3.6% in both 2015 and 2016, consecutively, due to new industrial projects coming online—predominantly in the fertilizer and chemical sectors.

Demand from the residential and commercial sectors is projected to decline in 2015 and in 2016.

The next STEO is expected on July 7.